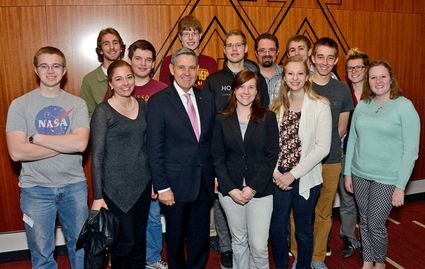 While the celebration honored Gilruth, the father of America's human space flight program, and many others who contributed to the region's innovation aviation legacy, the gathering also focused on supporting a new generation of learners.

"There is no lack of enthusiasm for space exploration," said Cabana.

"We need a culture that tells young people that they are the next generation of innovators, said Coleman, "and that we believe in their ability to change the future." 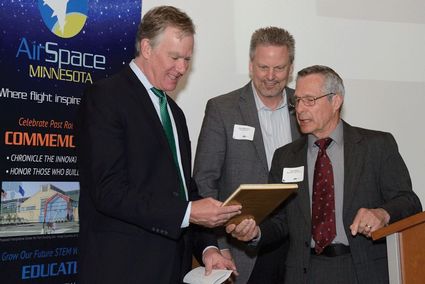 Author and Founder of the Minnesota Aviation Historical Society, Noel Allard presented Mayor Coleman with a copy of his book on Speed Holman, another contributor to the legacy of aviation in Minnesota.

Cirrus Aircraft CEO and Founding Chair of Airspace Minnesota, Dale Klapmeier noted how today's video games emulate the very real 3-D affect of flying, suggesting that introducing Science Technology Engineering and Math (STEM) via aviation may spark a dream in a student who may otherwise not realize his or her own potential in those areas.

"Let's use aviation to spark that desire in kids to say, 'I want to study,'" said Klapmeier.

The earnestness of Klapmeier's desire is evident in his donation of a Cirrus SR22 to the Learning Center.

Attendees lingered after the presentation to ask questions of the presenters and for the opportunity of a photo op.