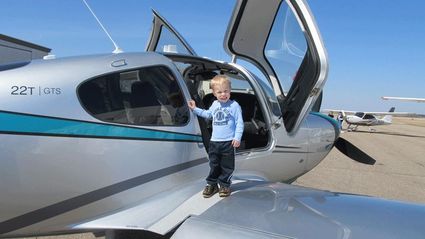 Rogers Shaw brought the portable chamber to the event as part of CAMI's Airman Education Program.

"We're giving pilots some portable reduced oxygen environment training in this tent," said Shaw. "It's a great safe environment. There's no partial pressure changes with this because all we're doing is converting the 20 percent oxygen into seven percent, which is like being at 24,000 or 25,000 feet.

"It's very safe. That's what's nice about it. You don't have partial pressure problems like trapped gas or decompression sickness issues. It's a great educational tool for pilots in a safe environment to let pilots feel symptoms they would find if they had a hypoxia problem in the aircraft."

Willing participants produced proof of their current medical, attended the seminar, then went through the briefing prior to entering the chamber.

During the experience, participants were monitored from outside, and inside by CAMI reps.

When finished, they were debriefed as well.

Shaw said each person must learn to recognize their own symptoms. Symptoms vary but often include dizziness, headache, euphoria, queasy stomach, feeling foggy, and getting warm or cold.

"I was surprised at how fast I needed the oxygen," said Cheryl Damal. "I mean, it was like a minute and I needed it. I was confused and maybe my vision was kind of cloudy. As soon as I put the mask on it was like, okay, I came out of the fog. It was very interesting."

"I really didn't know what to expect," said Kurt Olson. "That's why I'm here doing it. As we were talking I really didn't feel any of the other symptoms other than the one that says hot and cold. I felt warmer and warmer. Obviously, mentally I was just as fuzzy because when they finally did say put your mask on, I tried to put my mask on and it was upside down. I felt like I was a really kind of okay but I obviously was not okay. It was really good. It was fun. It was an interesting experience."

For those who are not age challenged, feel free to follow this leader, even though he is a mere 17 years old.

To break the norm, Nate Bruss soloed in ten different aircraft when he turned 16. He has his own aircraft detailing business, is working towards his A&P by hands on experience under the guidance of mechanics in a repair shop, is on track to get his private pilots license this summer, and is planning to get his instrument rating and commercial license in the future. He is also an active advocate of aviation. 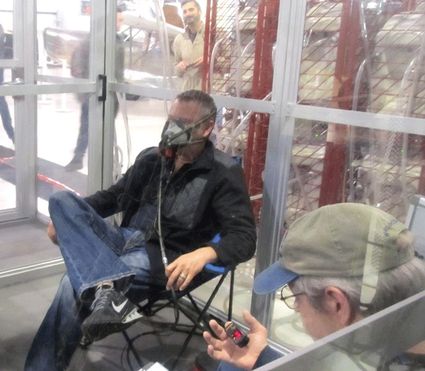 Rogers Shaw from the Civil Aerospace Medical Institute communicates from outside the chamber. Inside are Cheryl Damal, Dave Autio, and Jeff Voigt.

Thank you and good night

Minnesota Pilot Association President, Randy Corfman took time out from his manifold duties, responsibilities, and organizational tasks at the Great Minnesota Aviation Gathering to give an endearing greeting to two-year-old grandson, Jaxen Corfman who has more than a small chance to grow up to be a Super Cub pilot one day.

The second annual event, once again held in the Golden Wings Museum and on its outdoor grounds at the Anoka County Blaine airport, built on the success of its first year with more airplanes, more vendors, and more educational presentations for attendees.

Comments from vendors, presenters, and visitors indicated that the event was enjoyed by all.