Gentleman flyer reflects on the challenges of life 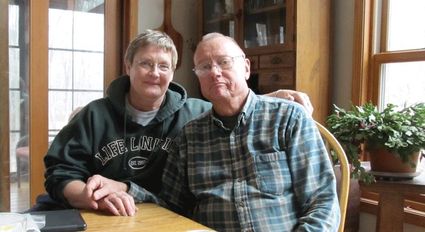 Sue and Jim Behrens relax in the comfort of their home in the country.

Conversing with Jim Behrens is a joy on multiple levels. His sense of humor, which pops up with impeccable timing, is evident from the onset of a discourse. This pleasant aspect of Behrens' communication skills is even more impressive when taking into consideration that sometimes the pertinent subject matter isn't actually amenable to laughter. However, no matter what struggles have been served on his life's plate, Behrens meets them with the demeanor of a gentleman.

Having grown up on a working farm on the border of Minnesota and South Dakota, it was most natural for Behrens to obtain a college degree in Soil and Plant Science, with a minor in Agriculture Economics and Animal Husbandry. However, upon graduation, he joined the Air Force, became a Maintenance Officer, and went to Vietnam.

"The closest I ever came to using the Soil and Plant Science degree is when I worked with F-111 aircraft," said Behrens. "They had kind of a green top, and the sides and bottom were camouflage and black, so if you squinted, it looked a little like a soil profile."

"That's the dream I had," said Behrens. "I don't know how far back it went. I know I used to cut pictures of airplanes out of magazines as a preschooler, and when I was in grade school I picked up Air Force Pilot brochures at the county fair. Sometimes you just get a calling for something in life and that's what you are driven to do."

Behrens was definitely driven. During his military training, he kept a civilian career in mind, purposefully navigating the proper channels that allowed conversion to civilian ratings, including an Air Transport Rating (ATP), "the PhD for pilots".

Schooling became a way of life for Behrens, sometimes in the capacity of a student, other times as an instructor. Of the three levels of professional military education (PME) for officers, Behrens accomplished the first two in the Air Force, Squadron Officer School for Captains, and Air Command and Staff College for Majors. The third, War College for Lieutenant Colonels in line for promotion, was attained as an Air Force Reservist when he was selected to attend Naval War College. After 13 years of active military service and 18 more years in the Air Force Reserves, he retired as a full Colonel.

From 1979 to 1988 it was back to the family farm located a couple miles from a hometown so small that, "they printed Welcome to Marietta on both sides of the same sign."

During that time Behrens threw himself into the aviation community by sitting on a number of airport boards, dabbling in a startup charter company, called Air Madison, and engaging in group ownership of aircraft. His first investment was in a Piper Cherokee 6. A favorite was a 1946 Champ tail dragger.

The drought of 1988 put a halt to farming but increased his focus on commercial flying. Unfortunately, timing was not with Behrens. In 1989 he hired on with Pan American as a Flight Engineer on 727s out of New York. Three years later, Pan Am, like so many others, went bankrupt. Then Express One hired him but he "drowned in their pilot pool," a term used for technically being hired but never being engaged to fly, or receiving payment.

After completing Naval War College, Behrens spent $20,000 for pilot training at Carnival Airlines, only to drown in their Pilot Pool, too.

"It's changed quite a bit now," said Behrens, "but back then, it was a pay for training deal where you had to pay for your own training to get a job with a private airline, otherwise they wouldn't even interview you."

A near ten-year stint with Sun Country Part I and Part II, starting in the class of October 1996, was his favorite because the small airline was "like family." It was the most enjoyable commercial flying he did in Boeing 727s and 737s.

When Behrens was "between airlines" he continued to build his private pilot repertoire. In the early '90s he spent two weeks at an airman school in Oklahoma City to get his CFI and CFII, after which he became a Flight Instructor at three different airports. He was also a Master CFI and a Gold Seal Instructor.

Year after year, he pressed in to meet every challenge to continue his career in aviation through five different Part 121 and Part 135 Air Carriers. He got recalled from furlough to fly for Sun Country Part II in the Boeing 737s. Then, at 59 years old, a physical hurdle was placed firmly in his path. Behrens learned he had colon cancer. He lost his medical. Yet, he was determined.

"We had surgery at the VA and they did a really good job," said Behrens. "I wanted to get back flying because my 60th birthday was in April of 2006. That's when I would have to retire, which I disagreed with, of course."

With persistence and a clean bill of health, he did get back to flying again in January of 2006. However, in April he reached age 60 and retired from Sun Country Part II which was the sixth Air Carrier he was with. Though rules have been modified nowadays, back then, 60 was the mandatory retirement age. After age 60 he flew as a Flight Engineer for Champion Air until they ceased operations 10 months later.

Though large aircraft Part 121 commercial aviation was no longer an option, the pilot turned to flight instruction and charter where he was a pilot for Eagle Air out of Hinckley, Minnesota, which ceased operations when they lost Behrens as one of their two pilots.

"There was an old TV show called Eight is Enough," said Behrens. "That's what I said, eight's enough. There may be more airlines to put out of business but it ain't going to be me to do it."

He also eased into flying for fun with Sue, his wife, whom he met later in life. Sue is also a Private Pilot, a Lieutenant Colonel and Squadron Commander in the Air National Guard, and a Flight Nurse. However, in 2009, once again, Behrens began not feeling well.

"The doctor said it is not uncommon for cancer cells to float around in the body and end up in the liver," said Behrens. "That's pretty much the story with me."

In addition to tumors on his liver, Diabetes was also diagnosed. Behrens attributes his medical maladies to Agent Orange exposure during his tour of duty in Vietnam in 1969-1970.

Once again, Behrens faced the challenge head on. He has undergone 115 chemotherapy treatments and 5 radiation treatments for a skull tumor. Though the plan to take on flying students in his retirement halted abruptly, he continues to fly with his wife and friends who now assume the Pilot in Command position.

"I think the hardest part of this whole thing is not being able to fly by myself," said Behrens. "The other thing is airport social life. I always tell my students, you need to go out to the airport and have some hangar time, visit with people. You can't live long enough to make all the mistakes yourself. You have to learn from other people's mistakes."

The reason Behrens isn't actively hangar flying is because of his most recent challenge. Chemotherapy is no longer effective for him.

"We're basically out of silver bullets," said Behrens. "Of the four different options the doctor gave me the last time we talked, three were treatments of some other kind and one was hospice. None of the treatments mentioned fun anywhere in the explanations. So then, I start to weigh, okay, if I've got three months to live and I'm going to be miserable on these treatments, or I've got three months to live on hospice and I've got quality of life, well, they're all rotten choices but hospice becomes an easier choice."

True to his character, Behrens is following a gentleman's line of reasoning. He is setting things in order. He has organized important documents, made necessary arrangements, written essential instructions. Of great importance is a book he wrote on the era from WW II through the end of Vietnam, which he had digitized.

"I tell people if there's one word that has affected my life more than anything it's the word Vietnam," said Behrens. "I took the history of that time and added my own comments because I wanted it to come from the horses mouth rather than some other part of the horses anatomy. I wanted my kids to understand this is really the way it was and dad saw it.

"There are about 2.4 million of us who served in Vietnam. Now there's only a third of us or less left. About 75 or 80 percent of us are dying at 70 or below. I'm right in that zone. So, if those rates continue, you're going to be hard pressed to even find a Vietnam Veteran in a few more years."

Pondering one's existence has a great deal more meaning when a time limit is set for such thoughts. Jim Behrens refuses to let the challenges he has faced and is now facing, to rob him of the joy of life.

"There's always hope. There's no time for pity parties or cursing God or cursing nurses or the doctor. You've got to look at positive things that are going to help you, and just keep the battle going."

When the last day of his battle comes, Jim Behrens has a respectful request of those who know him or know of him. 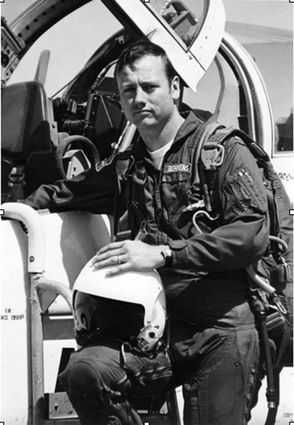 Jim Behrens in his Air Force pilot training days with a T-38 Talon. "We called it the 'white rocket' or the 'handy dandy training aid'! We got a supersonic ride in it the first flight! It was a great plane to fly!

"So, there's some fear and apprehension about facing what we have to face, and it's maybe not so much that final day but the journey that we're going to have to go through to get there.

"We don't know from day to day what that's going to be like, but after that day, how can I fear the possibility of crossing over and getting into the life that the people who have crossed over have seen? How do you fear that?

"I think we're in pretty good shape. I've got to pass the muster a couple more times, I'm sure, but I think we're on the right track at least."

Joy is not to be confused with happiness. Joy is that deep-seated emotion that generates comfort, confidence, and respect simply by speaking with a man who faces all of life's challenges with strength, calm, perseverance, and dignity.

Such a man becomes a leader, a role model for us to follow. Such a man is Jim Behrens.