Airport of the Month: Paynesville 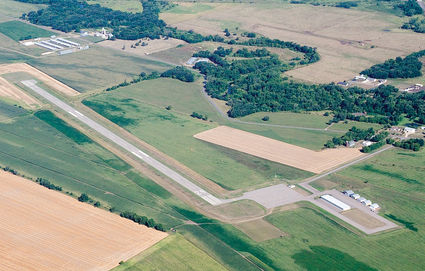 Maybe Paynesville should be called "Phoenix." Not because it's anything like the big city in Arizona, but because it might have some things in common with the bird from Greek mythology. The mythical Phoenix supposedly dies in flames then rises from its own ashes to live again. Both the City of Paynesville, and the Paynesville Municipal Airport have experienced a "rebirth," sort of like the bird.

Paynesville was founded in 1857 on land owned by Edwin Payne. Things were taking off in the new town until the 1862 Sioux uprising. A fort was built to protect the local settlers, but to no avail and the town was literally burned to the ground. Fortunately there were no casualties and in 1865 Paynesville literal rose from its own ashes. It was rebuilt to become what is now the City of Paynesville, which was organized as a municipality in 1881 with Mr. Payne as the first postmaster.

"A progressive town would need an airport." Those are the approximate words of Howard Diechen, a pilot from Waseca whose uncle was the clerk of the Paynesville Township Board. Horace Sheldon was the uncle's name and he was on the board for 50 years. You last that long in politics by knowing a good deal when you see it, so Mr. Sheldon put his mind to getting his town an airport. Howard had flown to Paynesville and used a field on the southeast side of the city as his informal airport. The field eventually was developed with two grass runways and became officially a public facility.

Things change and the early airport standards were one of the things that changed a lot. The new rules generally made for safer airports, but the first Paynesville Airport couldn't comply with the new state and federal guidelines. First one of the runways was closed, then the airport became a publicly owned – private use airport. That's an unusually situation where pilots need prior permission to use a public airport. Then came the second "Phoenix" episode in Paynesville, although without an actual fire.

Losing Paynesville as a public airport put big hole in Minnesota's aviation system. Both the State and FAA encouraged Paynesville to get back in the airport business. In the 1980s the search began for a better airport site. After several attempts to work with neighboring communities to build a regional airport, Paynesville decided to go it alone. Some of the locals with aviation expertise were recruited to help form an Airport Commission. Steve Brown was one of the local pilots who received the call. He's also the grandson of Horace Sheldon, so Steve naturally agreed to help out and spent over 20 years on the Commission. The group's effort resulted in a brand new airport that opened in 2003 on the south west side of town. It's got a 3300 foot long paved and lighted runway. There's Precision Approach Path Indicators (PAPI) and the LPV/GPS approaches to both ends that work very much like an Instrument Landing System (ILS). An Automated Weather Station (AWOS) is on the airport and there's self-service fueling. The Arrival/Departure Building is tucked into the end of the City owned "Tee" hangars and a courtesy car is available. 26 airplanes call the new Paynesville Airport home. A company that specializes in aircraft interiors as well as brokering used airplanes is in Paynesville. Another local aviation business designs and manufactures LED lighting systems for aircraft. That's all pretty good for a new airport.

So once again you can fly to Paynesville. It's a beautiful area with lots of fun things to do. Nearby Lake Koronis and Rice Lake are famous for fishing and water sports. There's a regional park and golf course too. Downtown Paynesville is pretty neat. There's some nice old buildings and several really good places to eat around town. A visit to the Historical Society is also worth the effort or you can just wander around town. Paynesville's annual celebration is "Town and Country Days" with parades and a picnic. It's a typical small town party that also includes a "fly-in" on the second Sunday in August, when there's always pancakes for breakfast and a static display.

Some years there's an airshow too, but never any flaming birds that will rise from their own ashes. Sorry.