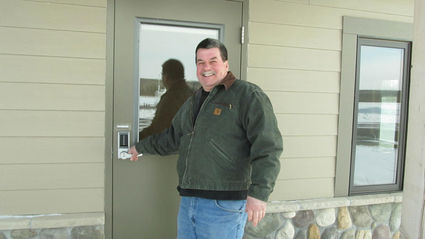 Moose Lake Carlton County Airport is very familiar to Randy Cichy, a private pilot who spends time both flying from it, or tending its grounds and buildings.

Sturgeon Lake resident Randy Cichy looks at Moose Lake Carlton County Airport (KMZH) with two different perspectives. One is through the eyes of a pilot. The other is the view of a grounds keeper.

As a pilot, he appreciates the layout of the airport because of some very practical points. It's clean. It's open. It's easy to see.

Unlike most pilots, if any of those aspects were to change, the pilot would have to look in the mirror if he wanted to complain about how the grounds are kept because he is also the grounds keeper.

Cichy has been frequenting the airport since 1984, flying his Cessna 172 from there. In 2010, he was asked if he would be interested in a part time job of maintaining the grounds. Since he was retired, he gave the idea due consideration.

"I've been around this airport for 30 years," said Cichy. "I just thought I'd give it shot and see how it goes. I've been here ever since."

The 3,200-foot tar runway is north south with a 1,200-foot clearing area on each end. There is also a parallel grass strip. Precision Approach Position Indicators are present.

Also tucked into the airport grounds are several privately owned hangars, a shop for grounds maintenance equipment, and an arrival and departure building with a handy conference table.

If, when you fly in, you get the feeling that you've seen those exact T-hangars somewhere else, you may be comforted to know you are absolutely right. They came from South St. Paul, Holman Field Airport. Carlton County purchased them years ago and transported them to their present location on the Moose Lake grounds. The county owned hangars rent for $135 a month. At present, there are no vacancies. However, there is sometimes space in one of the county owned heated hangars to accommodate over night storage of an aircraft, including a helicopter. That space rents for $20 a night.

Though the airport is unattended, Av gas can be purchased though the credit card operated system. While the runway can accommodate small jets, jet fuel is not available.

In 2013, the airport completed major reconstruction of the main runway and taxiway. They subsequently received a Merit Award for Outstanding Performance from the Minnesota Department of Transportation in recognition of Carlton County's contribution to a construction project.

Regarding winter maintenance, according to Cichy, in a moderate snow, it takes about six hours to clear the whole airport, runway, lights, hangars and A&D building parking lot. If a heavy nor'easter drops an unmanageable load, several hours can be tacked on to that time. Since the airport is county owned, when an over abundance of snow arrives, Carlton County provides assistance with major equipment.

Summer is another story altogether. Mowing is normally done by alternating sections from week to week, including the area under the helicopter on display at the airport entrance. Once a year the entire clearing area is cut, a job that can take 25 to 40 hours, depending on conditions.

As is the norm, traffic at the airport fluctuates with the seasons. However, there is one pilot, who is also a physician, who touches down on the runway twice a month year round due to services performed at a medical facility in Moose Lake. 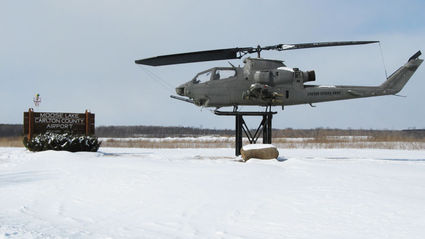 A Federal Government owned, static display of a 1967 Cobra helicopter marks the entrance to the Moose Lake Carlton County Airport.

An organization that uses the airport, primarily in the summer season, is Camp Heartland in Willow, just south of Moose Lake. Campers are commonly flown in from the Minneapolis area.

Other activities include an annual Fly-In Breakfast, business representatives on corporate jets, and General Aviation enthusiasts. The airport has also been used in the past by law enforcement to transport prisoners.

Even with the cold and snow, should favorable weather present itself, Cichy is an advocate of winter flights.

"Winter flying is a lot of fun," said Cichy. "You can see so much. The snow is bright so at night, if you have a full moon, the ground is like it's lit up."

As spring approaches, Cichy will trade in the snowplow for the lawn mower, and, from time to time take hold of the stick on his Cessna, all on very familiar grounds.