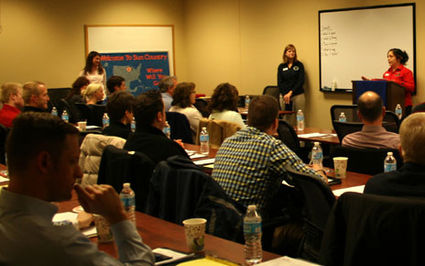 Courtesy of Stars of the North

Over 50 participants gathered in the Sun Country Airlines Hangar in March to absorb as many of the tips as Emerald Coast Interview Consulting could offer in a three hour presentation.

Stars of the North, the Minneapolis chapter of Women in Aviation hosted the event. Emerald Coast typically does an eight hour interview prep for clients. Stars of the North arranged a three hour information session to give members an idea of what may occur during a training period.

"It was incredible! said Stars president Jenny Neitfeld. "It was a very full house. We had people from every stage in their careers. It was a very diverse group."

Afton Benassi, a United Airlines pilot as well as a presenter for Emerald Coast, presided over the group.

"Afton was just fantastic teaching us," said Neitfeld. "Some of the things we went over regarding how to interview were body language, how to dress, how to answer initial questions, and how to create a brand for yourself so you do well in an interview."

Attendees took advantage of the allotted time with the consultant.

"There were a lot of great questions," said Neitfeld. "You could see everybody actively taking notes, trying to absorb everything Afton could teach because these pilot interviews are incredibly difficult. She taught some of the tricks of the trade to help land your next dream job."

Pilot Cassie Schroer testified to the effectiveness of Emerald Coast's training, a service in which she engaged prior to a recent successful interview with Delta, which resulted in obtaining a pilot position.

A bit of nostalgia came into play during the evening as both Benassi and Schroer are former Women in Aviation scholarship winners, a support they received on their career paths. Both have experienced what is common to most pilots, each new position requires another interview.

"For student pilots, when you get your first job, it's great," said Neitfeld. "Then you go back to them for each progressive job you're seeking. So when pilots are moving through their career stages, it's nice to freshen up for each interview.

Feedback from the members about the presentation was positive. Neitfeld said Interview Prep presentations will continue to be held once or twice a year. For more information about those times, or other activities hosted by Stars of the North, check out their Facebook page.