New sims are more than an alternative to flying

Save time, money, reduce stress in a SIM 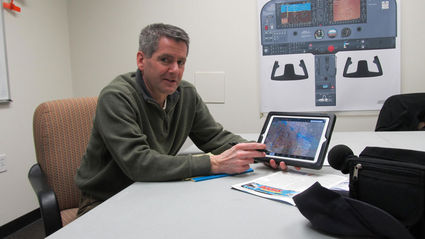 Steve Thibault explains that an Ipad can be used for an instrument approach in the case of an aircraft electrical failure.

As the saying goes, old habits are hard to break. Sim Flite Minnesota is all about easing out those old habits and firmly establishing new as painlessly as possible.

Steve Thibault and Tom Schmelzer, both pilots as well as flight trainers, are co-owners of Sim Flite Minnesota, based in the RC Avionics building at Anoka County Airport in Blaine.

Tom Schmelzer points out that Sim Flite Minnesota serves three basic groups of clientele: Pilots getting their instrument ratings, pilots maintaining currency requirements, and pilots who come in on a regular basis to keep their proficiency up.

At present, the FAA allows simulators to be used for 10 of the 40 hours required for an instrument rating. The six approaches and holding patterns every six months is also a common use for the simulators.

However, Steve Thibault notes that there is a significant difference between currency and proficiency.

"We have several people who come in here on a monthly basis to strengthen their proficiency as well as maintain their currency," said Thibault. "They do above and beyond what is required as a minimum so they can build up proficiency and do different tasks and stay sharp at those tasks."

Another comfort zone creator is for VFR pilots who have left the skies for extended periods of time but want to get back in. Rather than climbing into an airplane to blow the dust off, Sim Flite Minnesota recommends engaging in a simulator to re-familiarize with running check lists, starting an airplane, talking on the radio to a control tower, going through takeoff procedures, maneuvering en route, doing turns, climbs, stalls, engine failures, landing, and debriefing. Not only is the environment less stressful, it is a more efficient, less expensive way to learn.

"In a simulator, we can position you anywhere in space so you don't have to burn up time starting the engine, warming it up, taxiing out to the end of the runway, taking off and flying to a position where you can start your training experience," said Schmelzer. "From that standpoint you save quite a bit. You're not paying for an airplane to fly around just to get to where you need to be to start training."

Huge savings also occur when a pilot uses a simulator when considering installing a new glass cockpit. Thibault has been training pilots for over 29 years so he has a deep empathy for pilots facing the challenge of switching from the standard six

round dial set up to the new glass cockpit. Thibault maintains that, like anything else, it just takes practice. Practice is Sim Flite's specialty.

"One of our simulators is a G100 equiped glass cockpit," said Thibault. "If a pilot isn't quite sure he or she wants to use that equipment, they may come in here for lessons, just to see if they want to make the investment of these new avionics in their airplane."

Another new aspect of flying is use of the Ipad.

"If an airplane has an electronic failure a pilot can do an instrument approach using the Ipad," said Thibault. "This is linked to our simulator, so no matter where a pilot is in the country, in an emergency, they can use the simulator to fly the approach from the Ipad."

Even when the electronic system is operating, some pilots take advantage of Sim Flite Minnesota's Trip Preparation service when they want to practice landing at their destination airport.

"We can operate out of any airport in the United States," said Thibault, "and we can create any kind of weather we want. Pilots can practice instrument approaches at any airport before they actually go there."

"Whenever a pilot goes through the interview process for an airline," said Thibault, "they will be typically put into a simulator and run through a handful of tasks to show that they are competent as an instrument pilot."

A new service Sim Flite Minnesota is offering this year is Pilot Evaluations.

"When we evaluate instrument flying skills, we can give the pilot several different tasks that would be encountered during flights< said Thibault. "Then we can give them some tips or a program that would improve their flying abilities." 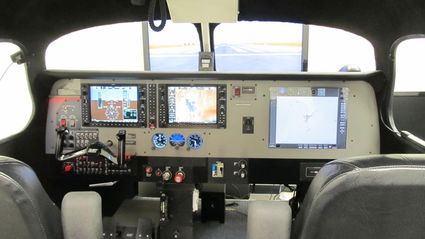 Using the G1000 Simulator is just like being there...without the stress.

Sim Flite Minnesota also allows Certified Flight Instructors, once they've been checked out in the operations of the simulators, to train their own students.

Sim Flite Minnesota is also a member of the Blaine Airport Promotions Group, consisting of business on and off the airport that understand and actively express the value of a General Aviation airport to its surrounding community, from its economic impact to its practical application in teaching the next generation about all things aviation, old as well as new.

Whether using a traditional six dial configuration or the new glass, flying for currency or proficiency, instructing or learning, Steve Thibault and Tom Schmelzer invite you to break out of your comfort zone at Sim Flite Minnesota where you can give it a try before you literally take to the skies.