Cherished memories include over 30,000 hours in the air wiht students, family and friends 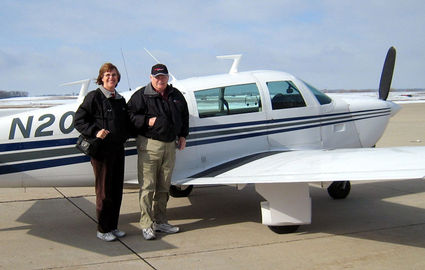 Barb Mack and husband Ed Erickson with their Mooney before departing from Fergus Falls.

With the passing of a man so generous, and so passionate about aviation as Edward Erickson, there is much that will be missed.

At Ed's Celebration of Life, held in August¬¬ at Anoka Airport last year, wife, Barb Mack, and children, Kathy Pavelko, Susan Beeso, and Eric Erickson were much comforted by the abundance of stories shared by friends, family and aviation enthusiasts whose lives were so highly impacted by this inspirational leader.

"Flying was his life," said Barb in a recent interview. "No matter who stopped by the hanger, Ed would always say, 'Let's go fly.' He just wanted to share the experience of flying with everyone. In fact, his kids used to say, 'If you want to see Dad, you better go to the airport.' Even when Ed wasn't flying, he was reading aviation manuals or magazines at the hangar or at home."

Ed's intense interest in aviation began in his teenage years while living in Annandale. When his parents had errands in Minneapolis, he would accompany them, then catch a trolley to the old Robbinsdale Airport where he would hang on the fence and watch planes take off and land. His solo flight was on his sixteenth birthday. From that point on, he was hard pressed to keep his feet on the ground for any extended pe riod of time. Ed received his private pilot's license in a J-3 Cub on floats while serving in the Army (1948 -1949).

Over his lifetime he flew over 30,000 hours, piloting 160 different aircraft rang ing from the J-3 Cub that he soloed in, to the B-757 from which he retired. During the years between, he was a flight instructor for Lakeland Skyways, flew a DC-3 for both Purdue University and Watkins company. He then flew as Captain for North Central Airlines on the DC-3, Convairs, and the DC-9. Later, North Central became Republic Airlines where he flew the B-727 and B-757. Ed finished his career flying as Captain on the B-757 for Northwest Airlines.

Further accomplishments during those years include operating (with two partners) the Jeb Arrow flight school at Flying Cloud Airport; being influential (with oth er key individuals) in converting a wheat field, owned by Dick Molnau, into a grass runway, which became Waconia's airport; and helping form the Dakota Daredevils Aerobatic Team out of Minot, ND. The team consisted of Al Pietsch in his Starduster, Jim McDonald in his Citabria, and Ed in his S1S Pitts performing in air shows during 1977 and 1978.

Ed continued to fly aerobatics in Mid west air shows in his S1S Pitts and later in an S2A. Also, he was honored with flying the TBM Avenger off the Navy's aircraft carrier USS Carl Vinson in 1995 as a part of the 50-year celebration of the end of WWII. After retirement from NWA Ed was Chief Pilot for the next 14 years at AmJet (KANE) for all the warbirds and other aircraft. Two unique aircraft Ed flew were British aircraft, the Fairey Gannet and the AVRO Shackleton. Ed had an Unlimited LOA endorsement from the FAA that reads, "All makes and models of single and multi-engine, piston powered authorized aircraft."

Ed organized two trips to Russia (with other pilots) seeking to purchase L-29 jets from the Russian Government. Over time, the project was adjusted, resulting in 15 L-29 jets being purchased from the Czech Republic in 1993. They arrived disassembled, in shipping crates, with Russian instructions. Ed's airplane was assembled first. After obtaining an FAA airworthiness certificate, he taught several of the other owners to fly their own aircraft.

On August 22, 2013 the FAA honored Edward L. Erickson with the Wright Brothers Master Pilot Award for a distinguished flying career spanning more than 50 years. Ed owned many aviation aircraft during his lifetime, including single engine, multi-engine, aerobatic, and experimental planes. Ed and Barb (a designated pilot examiner) co-owned a Mooney 201 and an Experimental RV-4. 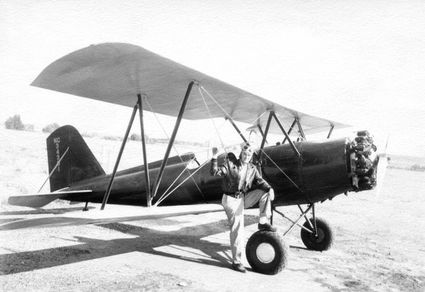 A dashing Ed Erickson with his Meyers OTW.

The couple also flew corporate aircrafts for several years. In fact, both Ed and Barb's lives centered around the airport, attending Fly-In breakfasts or other aviation events, either as a couple or with family and friends. "Ed just liked being around the airport," said Barb. "Even if it was raining, or for some reason we couldn't fly, we'd just come out and get caught up on other things we had to do. We always said our hangar was our cabin away from home.

"Over his lifetime, Ed taught many people to fly, ferried their airplanes, and helped in many ways. He was an eternal optimist who generously gave of his time and talents. He loved family, friends and his country."

Though Ed Erickson is no longer a physical presence at Anoka Airport, the impact he made on people and in aviation will be felt for years to come.