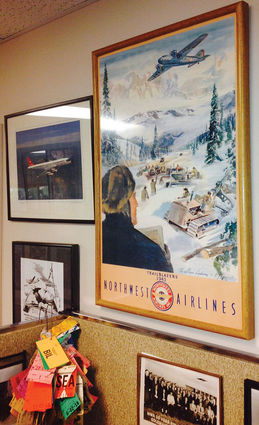 During WW II, Northwest was tapped to provide air logistics to Alaska due to their experience in flying in winter weather. In this poster, a DC-3 (or C-47) is pictured overhead the construction of the AlCan highway -- linking the U.S. to Alaska. Contrary to popular belief, many of the airfields pre-dated the road--the route selection for the road was to help supply the all-important airfields. The Alaska experience helped Northwest become the pioneer airline to the Orient--older readers will recall the radio commercials announcing "Northwest ORIENT (gong) AIR LINES".

It's cold and windy outside, and the days are short. Not exactly great fun-flying weather-but if you want your "aviation fix" to help get you through until Spring - here's a suggestion. Visit the NWA History Centre. (Note: This is also a good place to go if the rest of the family wants to go to the nearby Mall of America).

Never heard of it? Most people haven't - unless you are a former Northwest Airlines employee. I was unfamiliar with it as well, but I serve on the Boards of Directors of both Minnesota Aviation Hall of Fame and AirSpace Minnesota with NWA History Centre Executive Director Bruce Kitt. Bruce's enthusiasm for all things aviation - and all things pertaining to Northwest Airlines history - made me want to learn more. Never shy about "asking for the order" - I asked for a tour, and he readily accepted.

One of the reasons that more pilots don't know about the NWA History Centre is because there is no large sign to identify it. As you would expect, it is located nearby MSP International Airport, at 8101-34th Ave. South, Bloomington, MN. 55425-1642. (see accompanying map). Plug it into your auto GPS. Take I-494 to the airport-take exit 1B. Turn South on 34th Ave. (the avenue that runs by the Humphrey Terminal and Ft. Snelling Cemetery) until you see a sign marked "Appletree Square". Turn left across the light rail tracks, then the first right onto the Wings Financial Federal Credit Union parking lot. Enter through the glass doors on the left/south side of the building. Directions are posted inside. If coming from Downtown, take the light rail train, exiting at the Bloomington Central station. The building is located only 100 yards east.

I asked Bruce "Why here? Why this location?" He replied "This building used to be the Wings Financial Credit Union. It was available after the Delta merger, and it's close to the airport."

Once inside the well-kept museum, Bruce continued. "This museum was conceived and is staffed by volunteers - mainly former Northwest Airlines employees. There is no other NWA museum, and we felt that this is a story about a Minnesota-based company that ought to be told. It's a story about a company that started in the early days of aviation - used it's cold-weather experience to conduct operations to Canada and Alaska during WW II-established regular air service to the Orient in the postwar period, and grew to be a worldwide airline, with headquarters right here in Minneapolis."

Unlike so many other museums that concentrate on brick and mortar - and the preservation of artifacts -- the NWA History Centre uses the artifacts to tell the story of the PEOPLE of the airline. Uniforms, for example, run the gamut of the leather and fur flying togs of NWA pilot #1 "Speed" Holman - to the military-style uniforms of WW II and postwar era (NWA was active in establishing air routes to Alaska during WW II - ferrying people and cargo) - to the modern "dress" uniforms today. Stewardess uniforms reflected the conservative dress of the Midwest - Chairman Nyrop was not one to adopt the "mod" fad of the 1960s, as several other airlines did for a short time.

There are no formal "guided tours" of the museum, and the volunteers won't intrude on your visit unless asked - but they are ready to answer any questions. (Hint: show up with a box of donuts and ask a volunteer to share them with you - these people have so many incredible stories to tell about the airline and the people that worked there!) Every artifact becomes a departure point for a story. The models of the planes become starters of conversation on what it was like to fly and work on them. The fine china dishes relate to an earlier time, when people dressed up in their finest to fly to their destinations. Artifacts from the Orient reinforce Northwest's pioneering routes there, as do photos and posters from Alaska. The teletypes hark back to a day when it was the fastest way to get paper documents from one station to another - whether weather or flight information. One of the largest artifacts is a "reservation table" from Manila - a time when up to eight people sat around it, manually processing reservations that would take passengers on a piston airliner to the other side of the world.

I've always been fascinated by airliners - it's amazing to think that the airplane pulling into the gate may have been on the other side of the world only a few hours ago - and after receiving fuel, attention by mechanics, cabin cleaning and supplies, and a fresh crew, it will be going back there. The utilization and reliability of modern airliners would be unthinkable to the crews of the piston airliners-yet somehow, those crews also made the system work-and without the conveniences we take for granted today.

There is no cost for admission to the NWA History Centre - but there IS a donation bo x- or you can support them by becoming a member. There is a book store/gift shop within, where you can buy books about Northwest Airlines, or buy a memento of an era that has now passed. The NWA History Centre is always looking for NWA memorabilia. The museum is open Monday-Friday from 11 a.m. to 5 p.m. (except holidays) and other times by appointment. They can be reached at 952 698 4478. (Don't forget to bring donuts for the docents!) 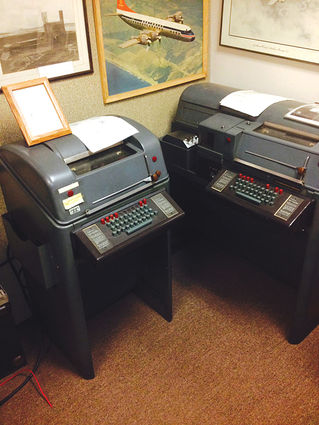 Before the advent of the internet, weather, flight dispatches, and intra-company communication was accomplished via these chattering teletypes. To save transmission time on the slow teletypes, pilots had to decipher the contractions of words and the use of symbols to convey weather. Incongruously, some of those contractions and abbreviations continue to survive today in the age of the internet.

Jim Hanson is the long-time airport operator at Albert Lea. Jim realizes that Northwest Airlines was a world-wide carrier, but hasn't figured out how come the spelling is "History Centre" instead of "Center" (but that isn't all that mystifies him). If you have the answer to this question, or any of the other questions of Life's Greatest Mysteries, Jim can be reached at the airport office at 507 373 0608, or jimhanson@deskmedia.com