Airport of the Month: Ortonville 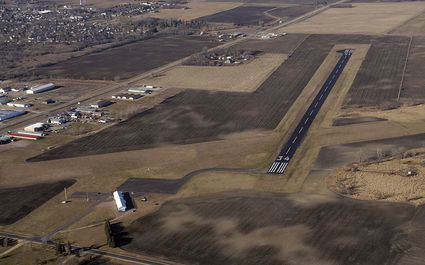 From its source at Big Stone Lake on the South Dakota border, the Minnesota River flows 332 miles to its confluence with the Mississippi just below Fort Snelling and the sprawling Minneapolis/St. Paul International Airport. It's a scenic river for the whole way, but arguably the best part is at the beginning and the pretty little lakeside town of Ortonville. You can use the Airspace System at the upstream end too, thanks to the Ortonville Municipal Airport.

Also known as Martinson Field, the Ortonville Airport has a 3400 foot long paved and lighted runway with Precision Approach Path Indicators (PAPI) and a GPS/RNAV Approach. The second runway is 2200 feet of well-cared for turf, and the airport has a new self-service fueling system with both Aviation Gas and Jet Fuel. There's an Automated Weather System (AWOS) on the airport and if anybody has the equipment and remembers how to use it, there's also a Non-direction Beacon (NDB). A new automobile parking was recently completed and the remodeled Arrival/Departure Building will open soon.

Ortonville was founded in 1872 by a fellow named C.K. Orton. It's easy to understand why he used his initials, because his full name was Cornelius Knute Orton. Orton was a famer, but he also operated a trading post and became the first post master when the village was incorporated in 1881. Now a city, Ortonville is right on the lake shore and the historic downtown is a real jewel. There's Lake Side Park next to downtown with a swimming area and boat launch. It might be hard to tow the boat with your airplane, but a couple places nearby rent boats so you can fly-in for the great fishing.

If the fish aren't biting, the local bird watching is also fun. The area is home to a colony of White Pelicans. These spectacular birds can have wing spans of almost 10 feet. They migrate in large formations and forage by flying in "ground effect" along the water's surface to find food. They're a wonder of aerodynamics.

Maybe the Pelicans inspired Wayne "Whitey" Johnson, who grew up near Ortonville. During World War II he flew for the 23rd Fighter Group (the famous Flying Tigers) in China. The 23rd was part of the 14th Air Force commanded by General Claire Chennault. Johnson's parents were tenant farmers and Wayne traded labor for flying time with a farmer in nearby Chokio who owned a Curtis Robin. He enlisted the day after the Japanese attacked Pearl Harbor and after the war became well known as a lawyer.

Johnson is the author of "Whitey, from Farm Kid to Flying Tiger to Attorney". The book is a great read, particularly his account of growing up in a farming community during the Depression. He established his law practice in Beaver Bay, but continued to use his flying skills and helped get the airport in Silver Bay started. In 2001 Wayne Johnson was inducted into the Minnesota Aviation Hall of Fame.

Ortonville Airport is named after another one of the local leading citizens, Edwin or Ed Martinson. Although Martinson was a railroader he supported the airport. While working for the Milwaukee Road for 51 years, he found time to serve on the Ortonville City Council from 1932 to 1939 and as the Mayor from 1953 to 1968. In between he represented the area in the state legislature for 14 years.

The airport is located just on the east edge of town. The city has a courtesy car if you need it, but there's both a golf course and a supper club within easy walking distance. The Big Stone County Museum with its new addition is also near the airport. If you're staying awhile, there's a motel just ½ mile away and there are several nice resorts on the lake. An under-wing camping area is also available, or Big Stone Lake State Park is only a few miles north of the airport. The big city may be at the downstream end of the Minnesota River, but you can have just as much fun at the up-stream end. And, you can get there with a scenic flight that ends at the Ortonville Municipal Airport.