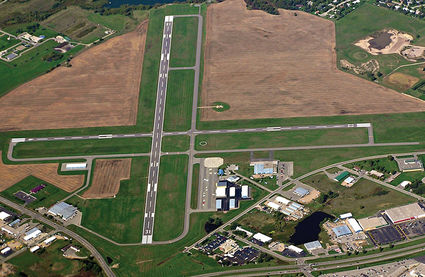 One of many community treasures, Alexandria Municipal Airport, also known as Chandler Field.

Minnesota's airports have a tremendous value not only to the cities and towns they are in, but also to the surrounding communities, the state and the nation. There are many factors involved that demonstrate the value of an airport to a community. Two very important ones are the economic and social impacts.

First look at the social impact of an airport, then the economic impact, and their impact on the state and the nation. By definition, general aviation is considered to be all flying in the U.S., except that done by the military and scheduled airlines. Almost every general aviation airport in Minnesota, from Grand Marais to Luverne, from Hallock to Caledonia, are available for use during medical emergencies, flight training, law enforcement, airborne traffic reporting, news reporting, overnight express delivery, bank check clearance, search and rescue, power and pipeline patrol, agriculture, mail, priority freight, personal air transportation, tourism and more.

The economic impact an airport contributes to any town includes the number of businesses at the airport, their jobs and payroll; businesses connected with or dependent on the airport and the jobs and payroll they provide; outside businesses that fly to your airport; flight training; tourism; and much more. The airport is the front door to a community for those seeking economic development opportunities. That brings back the question of the value of an airport.

According to the Aircraft Owners and Pilots Association (AOPA), "an airport, regardless of its size is a community's access point to our nation's major modes of transportation. Airports create jobs and income; saves lives; helps enforce the laws," and "is a terminal destination for passengers, freight and mail." The AOPA continued, "the airport can be considered as one of the town's principal resources because what the airport does best is to serve people who don't fly."

Current data FAA data shows that there were over 5,100 active aircraft, and over 16,000 pilots registered in the state. The general aviation industry also brings in over $49 million to the state's economy annually. When people fly to any of our 135 airports or 15 seaplane bases, they buy fuel and oil, they eat in local restaurants, they rent cars, they stay in local hotels and they use area businesses and entertainment attractions. For every aviation dollar spent at the airport alone, more than $1.52 comes back to the local area. All of this economic and social activity comes as a direct result of the airport in that town or city. It brings benefits to the people whether or not they use the airplanes or the airport.

Federal aviation statistics for 2014 show that in the United States, the general aviation fleet totaled over 200,000 aircraft that logged more than an incredible 4 billion miles! It is important to point out that there are more than 5,200 airports in the U.S. and general aviation serves the people in and around all of them. As a contrast, airlines operate from only 388 airports nation-wide. More than half of the airline operations originate at approximately 30 major airports, (of the 388).

General aviation operates into areas that airlines choose not to, or are unable to serve. This fact alone demonstrates the tremendous flexibility of general aviation and its ultimate value to the Nation, our State, and to our communities.

Now you can see why the airport is your community treasure!