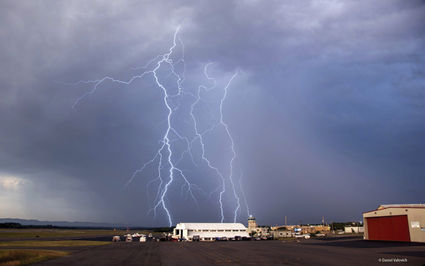 The beauty of spring comes in a vast array of sights, sounds, and aromas. Once the snow is all gone and the earth has felt a few days of the suns warmth, dozens of different types of vegetation will spring forth. Many will grace our eyes and noses with beautiful flowers and sweet smells that invite us to come closer and enjoy. Even the simple blades of grass exude a sweetness that draws us to lie down for a few minutes and breathe-in the fresh sweetness as we watch the clouds quickly changing shape overhead.

The wisps and lumps of swirling clouds seem to tumble and play in the ever changing sky. Now we can see them gathering together in a growing bump that quickly takes on the familiar sight of what will soon be an active thunder cell. It may be a single cell but it could grow into multiple cells or even an active squall line.

You can see the beauty that a distant thunderstorm may offer but are you aware of the potentially destructive power that a cell can produce? The four most common elements of a thunder cell are lightning, down bursts (damaging winds), potentially heavy rainfall, and hail.

Of these things lightning is arguably the most potent and immediately destructive element. For clarification, the balance of this article will refer to thunder cell impact and potential impacts on ground based objects. No intelligent General Aviation aviator will be within 15 miles of cell in an airplane!

All water molecules carry an electrical charge. Lightning, simply put, is the difference in charge between the cloud (thunder cell) and the earth below. As rain is carried upwards in a thunder cloud, it freezes and builds a positive electrical charge. Most of the rain at the base of the cloud is negatively charged. As the frozen raindrops become too heavy to be held by the cloud, they fall and begin to warm and melt. Scientists assume the charged path for the lightning bolt follows these falling, melting drops. When a good connection is found on the earth's surface, the circuit is completed and the lightning bolt discharges within a half second.

Each bolt of lightning can be charged with up to 100 million volts and 50,000 amperes (amps) of electrical power. Keep in mind that one sixth of an amp can kill a human being! Also in that fraction of a second, lightning heats the air around it to 54,000 °F, or approximately 30,000 °C. That is considerably hotter than the surface of the sun. This super-heated air expands explosively. As it expands it rapidly compresses the air around it creating the initial sharp "crrraack" sound, followed very closely by the familiar pounding rumbles.

According to the National Lightning Safety Institute, "Close-in lightning has been described as first with a clicking or cloth-tearing sound, then a cannon shot sound or loud crack, followed by continuous rumbling." Malan (1963) described these in more technical terms as: click is the upward leader(s); crack is the return stroke; rumble originates from the upper regions of the channel.

There are at least a dozen "types" of lightning and a number of associated TLE's (Transient Luminous Events); lightning produced events that occur very high in the atmosphere and rarely visually observed. But for this article we will only discuss two types. They are called Positive and Negative Lightning.

In a June 2010 Aero Safety World magazine article written by Clarence Rash, titled When Lightning Strikes, he states very clearly," The most common type of lightning discharge is cloud-to-ground or "negative" lightning, which accounts for 90 percent of all lightning strikes. The discharge usually begins when a significant difference develops between the negative charge in the cloud and the positive charge on the ground - or in another cloud. At this point, the negative charge begins moving toward the ground, forming an invisible conductive path, known as a leader stroke."

Rash continues, "Concurrently, a positively charged streamer is sent out from the positively charged ground or other cloud. When the leader and the streamer meet, an electrical discharge - lightning - takes place along the streamer, up and into the cloud. It is this return stroke that is the most luminous part of the lightning discharge, usually the only part of the lightning process that is actually seen."

Positive Lightning is not the complete opposite of Negative Lightning as one might expect. The upper region of the thunder clouds is where a high positive charge is located. The "Positive" lightning bolt originates in the upper part of the cell where a positive charge derived from the cloud is carried toward to the ground. There it meets a ground streamer that carries a negative charge, and the circuit is complete.

The US suffers more than $4-$5 billion damage annually from lightning. Commercial losses to buildings, hangars, aircraft, and other aviation equipment can quickly total in the hundreds of millions of dollars across the country, every year. In the recent past decade or so we have seen a rise in the number of super storms (storms with greater than average intensity). Some scientists believe this is a result of El Nino or La Nina, while others think it is a direct result of global warming. Whatever the case, without adequate steps to prevent or greatly reduce lightning damage, the dollar figures will surely continue to rise.

In an effort to help pilots better protect their aircraft from lightning strikes, the FAA has proposed new airworthiness standards that would reduce the risk of lightning causing an aircraft to crash. In the FAA's news release, it noted that lightning strikes about once every 100,000 hours of flying," but the new regulation would ensure airplanes are properly prepared to handle a lightning strike. The new proposal would include aircraft design and maintenance requirements that would prevent the aircrafts fuel tank from exploding during a lightning strike.

The news release further stated that "lightning strikes to airplanes result in significant current conducted throughout the airplane structure and equipment, and can induce voltage and current on wires, tubes, and equipment."

The structure of an aircraft protects the occupants from lightning because the structure is in essence a Faraday Cage, based on the principle devised my Michael Faraday, a noted physicist, in 1836. The Faraday Cage is basically a hollow enclosure, in this case a metal aircraft cabin that is made of electrically conductive materials. When a strong electrical field is applied to the structure the associated charge will redistribute itself on the structure's exterior surfaces leaving the interior completely uncharged. Composite fuselage structures contain a layer of conductive fiber (or screens) to conduct the electrical charges away from the cabin.

Despite the Faraday affect, a lightning strike on any aircraft can do a broad range of damage. A strike can cause burning or melting at the point of the actual strike. It can also cause arcing damage at bonding points, hinges, and joints. It can cause electrical damage, as well as acoustic damage to sensitive aircraft instruments.

If an aircraft is struck while in the air, the forward speed of the aircraft during the strike discharge time period can change the location of the entry and exit points as the discharge flow attaches to other points aft of the original strike point. Thus, with any one strike on a flying airplane, there can be multiple entry or exit points. Though the aircraft and systems may seem to be functioning normally, hidden and progressive damage may have occurred, and a device or system degradation or failure could happen at any time.

Any aircraft struck by lightning whether on the ground or in the air should be thoroughly inspected by a certified aircraft maintenance technician before being flown again. Regulatory agencies, aircraft and avionics manufacturers, and even fuel producers have significantly improved their products to withstand a lightning strike. But that does not remove the responsibility of the pilot to thoroughly prepare for flight with a professional weather briefing and a thorough preflight inspection using the checklist. It is wise to avoid any thunderstorm by at least 20 miles. Safety must be priority one especially when there is a possibility of an electric sky. 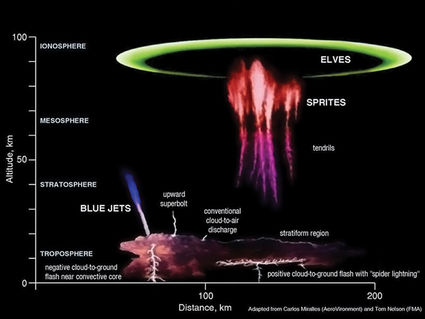