Put yourself in a Cirrus at the Great MN Aviation Gathering

Not a pilot? Not a problem! 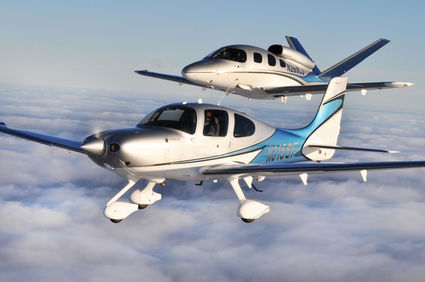 The Cirrus SR22T and SF50 Vision Jets gracing the skies.

Nestled among the historic aircraft at the upcoming Minnesota Pilot's Association Great Minnesota Aviation Gathering will be an aircraft that is currently making a history of its own. Creating the perfect contrast to the stalwart collection at the Golden Wings Museum at the Anoka County Airport on April 10-11 will be a personal jet from the Cirrus Vision SF50 series.

"We like showing at the Great Minnesota Aviation Gathering," said Gary Black, pilot and Cirrus Regional Sales Director for the Great Plains. "Minnesota has such a rich history in aerospace. Honeywell, Ballistic Recovery Systems, Cirrus, and so many other companies have found a start in Minnesota, so it's fun to see the historical aircraft at the Golden Wings Museum."

Every flying machine has its own story. In that regard, Cirrus creates a comfortable symmetry with all the other aircraft on display in the museum. However, it's the technological spin built into the ultra modern design from cockpit to skin that creates awe in the beholder.

For example, the Global Connect,™ a satellite phone that operates through the Cirrus Perspective™ by Garmin for business owners who want the ability to send texts or make phone calls in flight.

Another practical convenience of the system is the ability to download weather products, particularly handy when flying outside the United States where XM weather may not be available. Steering clear of bad weather has its obvious value, however Black notes there are more benefits to the Global Connect.™

"Let's say I was coming back from Toronto to Duluth and I hit 50 or 60 knot headwinds where 20 or 30 had been forecast," said Black. "I would certainly make a call at 16,000 feet to my local customs person in Duluth and say, with these winds, I'm going to be 20 minutes later than our appointed time. I could give them an hour's notice on that. That is going to make for a much happier custom's agent because he won't be waiting for me at the other end. He can stay in his office and just come up five minutes before my arrival time."

Synthetic vision is another available nicety.

"Synthetic vision actually shows you mountains, towers, lakes, and runways." said Black, "Even in instrument conditions, you really feel like you're flying VFR, particularly if you're flying at night. It really gives you much more situational awareness of what's going on."

It will come as no surprise that pilots are offered additional training for the aircraft.

"With a new Cirrus SR series aircraft we include three days of transition training," said Black. "People normally learn to fly this particular aircraft in the first two or three hours if they have glass cockpit experience. If they haven't had glass, it's probably five to six hours."

Additional training is available if anybody wants to do instrument proficiency checks, bi-annual flight reviews, or add on ratings.

If being a Cirrus owner is your heart's desire but gaining the knowhow is not, bear in mind that you don't have to be a pilot to own a personal jet. Cirrus offers a Pilot on Demand program for its aircraft owners.

"Some people aren't interested in learning to fly," said Black. "They just want the airplane for transportation, so we will find a professional pilot, commercial or flight instructor, and qualify them on the Cirrus. Then that individual will move to the location of the business owner and become their full time professional pilot. We may also have locally based pilots available on an hourly or daily basis."

Visitors attending the Great Minnesota Aviation Gathering may feel free to stop by the Cirrus display for a variety of reasons. For those who want an update on the progress of the Cirrus flight test jets, Verification V1, C0, C1, and C2, and getting the go ahead from the FAA to start certification point testing, Black will have that information available. 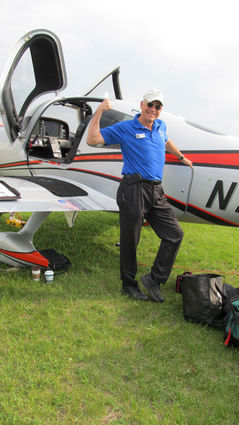 Gary Black opens up a new Cirrus SR22T for Discover Aviation Days attendees to try on.

He noted that the goal at Cirrus is to have certification for the SF50 by late 2015, with new deliveries starting shortly thereafter. Since they have over 550 jets on order, they are in the hiring mode. So, if you're an A&P, technician, or pilot, you may have a reason to stop by beyond admiring the aircraft on display. Whatever your line of interest, you are welcome to make inquiries.

"We'd like to expand our reach outside the normal 50 to 60 year old male pilot," said Black. "We'd like to see more female pilots, more non-pilots. The airplane really is designed for the non-pilot sitting in the right seat. It feels like a car. The vision is good. The information is amazing.

"We enjoy inviting people to take a look at new technology aircraft, so come on down. It's a great start to the summer flying season in Minnesota!"