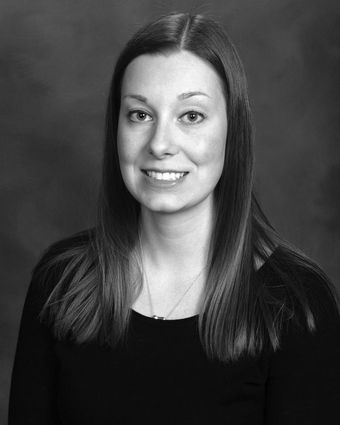 Kristin Kaplan Holsworth is a woman of her word. It is also evident that her grandfather's blood runs in her veins. Reuben W. "Buzz" Kaplan was a Minnesota born family man, businessman and world adventurer who passed away in 2002. However, in the year 2000 he had approached Kristin, his granddaughter with a request that she assist him in writing a book about his life.

Picture that. An elderly gentleman asking his granddaughter, who was a sophomore in high school at the time, to help him write a book about himself. It is a tribute to him, and to her, that she said yes. It is even more commendable that, after his untimely demise two years later, the young woman continued the quest on her own.

"We started by Grandpa dictating stories about his early life, his childhood, and time in World War II," said Kristin. "He dictated onto a tape recorder. Then I would type those stories for him. So we got through his early years and through the point in his life where he had obtained his pilot's license."

It was then that Kaplan tragically met his demise in an airplane crash. As Kristin and her family went through mourning, and as time passed, the book project would come to Kristin's mind. Then, she made a discovery of additional material of her grandfather's beyond the transcribed tapes they had worked on together.

"I found out he kept journals from all of his trips and adventures he had been on throughout the years," said Kristin. "So I was able to pull all those together and complete the book as a full story of his life."

For the next fourteen years of her life, as she attended Gustavus Adolphus College in St. Peter where she got her Bachelor's Degree in Chemistry; then during her days at the University of Minnesota College of Pharmacy where she obtained a Doctorate, when she got married, when she started working as a pharmacist...the book project kept calling her. Though compilation and editing went in phases, she persevered.

"Sometimes I would work on it quite a bit," said Kristin. "Sometimes I wouldn't touch it for year or two. I was going to school during so it had to be kind of an off and on project. I just felt like it was something I needed to do. We started it together, and it was something that my grandpa wanted to do. I just felt like I wanted to finish it for him."

Kristin points out that she is not a writer. She simply compiled what her grandfather wrote. She also researched newspaper articles and requested contributions from Kaplan's family and friends. She edited those stories together. The experience was not had without emotion.

"The very last chapter in the fifth book talks about the day he passed away," said Kristin. "I wrote that chapter from researching many different newspaper articles. That was a hard day. I was definitely typing through tears with that chapter.

"It was kind of a roller coaster of emotion all the way through, from laughing to crying to being really frustrated by how big the project was and not really knowing if there was an end in sight."

Another thing the young woman learned was how the same story can have a variety of perspectives depending upon who is doing the telling.

"When I reached out to some of his family and friends to contribute stories, which makes up the sixth volume," said Kristin, "I really found it interesting to hear some of the stories Grandpa Buzz told me told by different people. There is a difference in perspective. I thought it was interesting to hear some of those same stories told in a different way."

Once the project was near completion, Kristin hired a professional editor for the final version. She also hired a graphic designer to create the covers of each volume and the box into which they are compiled as a set. She then had the books published and marketed. There was no funding for the project so Buzz Kaplan's granddaughter covered the expenses herself. 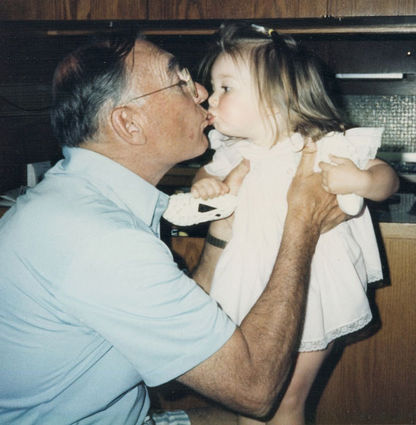 A tiny Kristin Kaplan shares a kiss with Grandpa Buzz.

Now that the project is complete, Kristin has the satisfaction of knowing she kept the deal she made with her grandfather.

After hearing her story, one can say they have learned something about Kristin as well. She is a woman of her word.

For more information on the boxed set visit: http://www.BuzzKaplan.com