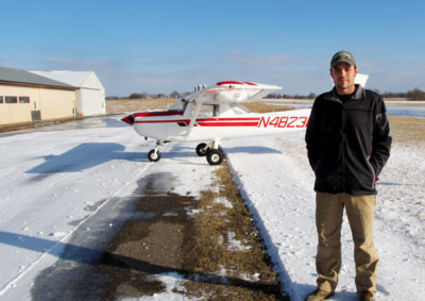 Jason Erickson at the Maple Lake FBO. Cessna 152 is in the background. Ascend Aviation's fleet consists of two Cessna 152s, a 172, and a Piper Arrow.

When Jason Erickson was 16 years old he surprised his parents with a call from the Buffalo Airport requesting their presence while he took his first solo flight.

"Solo?" his folks replied. "But you weren't supposed to be taking flying lessons until you got your driver's license!"

Oops. It seems Erickson just couldn't help himself. At age 14, he started working at the Buffalo Airport, about seven miles from his home in Rockford. He worked after school during the winter, and as much as possible during the summer. Most often, his parents drove him to and from the airport, but there were times the enterprising youth even rode his bicycle to work.

"I basically grew up at the airport," said Erickson. "Since I was probably 16 or 17, I've wanted to have a flight school and a maintenance shop. That's all I ever wanted to do. So, it's been a lifetime."

Persistently following his dream, before he turned 30, Erickson had opened Ascend Aviation in Princeton. In 2014, he also became the operator of the Maple Lake FBO, complete with maintenance shop. At present, he is a mere 33-year old.

Though highly commendable, these are not the only impressive feats this dedicated man has accomplished. Another goal he attained along the way was getting his A&P mechanic's license. This he did by studying maintenance manuals and engaging in hands on experience as he worked under the guidance of others at the Buffalo Airport.

"It was the long way to go," said Erickson. "It took several years. Then, I finally just went in and took the test. It's a minimum of three years to do it that way, versus going to a one or two-year school. You've got to read the books and do all the study on your own. It's a harder route, especially if you're doing life at the same time so it takes dramatically longer."

After high school he attended Anoka Hennepin Tech for air traffic control...not that he wanted to be a controller.

"I just didn't want to get a degree in flying because I was already flying," said Erickson. "By the time I got to Anoka Hennepin Tech, I already had all the flight ratings I needed to graduate from there. I wanted something different, so I went for air traffic control."

After his college years, Erickson went on a mission trip to East Asia, during which time he met Keri, the woman who would become his wife.

To nobody's surprise, they got married in a hangar at the Buffalo Airport. The couple began planning a mission trip to Indonesia.

Erickson went through the flight and maintenance training and an evaluation for Jungle Aviation and Radio Services (JAARS). After completing training, he began working flight instructing at Buffalo (KCFE) while simultaneously engaging in fund raising for the move abroad.

Timing was not with them, however. It was 2008, the year everything changed for everybody due to the Great Recession. Though they set missions aside for the time being, another opportunity arose. Susan and Terry Marsh, owners of Buffalo Aviation, retired. Jason Erickson was ready.

"I bought the 152 that I was using for flight training and just kept it going," said Erickson. "We had a huge demand from students in Princeton. So I just kept flight instructing and it grew from there.

"Now I have two other flight instructors and a full time mechanic besides myself. I go back and forth between flying and maintenance. Usually it will be work in the shop a little bit, then I'll go fly, then go work in the shop, then fly. It's a little bit of everything."

Additionally, Ascend Aviation is working with the city to reawaken the seaplane base that has been out of operation for six years. Erickson rescued the floatplane trailer that had been sitting near the shore with trees growing through it.

"I went down there and cut it out, fixed it up, and put new tires on it so we could start launching seaplanes when the ice is out," said Erickson.

Keri, Erickson's wife, works with him at Ascend Aviation. 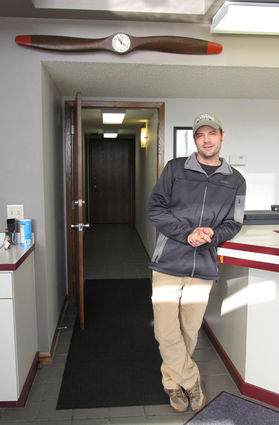 Jason Erickson at the Maple Lake FBO making himself comfortable at the counter in the Customer Service area.

"My wife is an important behind the scenes person here," said Erickson. "She does all of our books, all of our invoicing, everything. She works from home so nobody ever sees her but, without her, this place would be in shambles. Without her, there is no way this would be possible."

Is the dream come true all he thought it would be?

The Ericksons also have a son, Patrick, who, at nine years of age, already keeps a logbook for his flight time. You can be sure if Patrick tries to secretly take flying lessons before he is 16, he will not be successful, because that is one trick his father is already on to.