Airport of the Month: McGregor 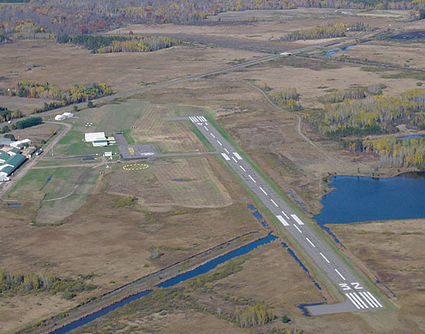 Isedor Iverson wasn't a famous aviator. He might be best known as a politician, but leadership was his real talent. Iverson was Mayor of McGregor and also represented the area in the State Legislature. He started the city's electrical utility and the volunteer fire Department, all this while the Swedish immigrant was operating the local automobile dealership for 42 years. The mayor (and car salesman) knew the value of a good airport. His contribution to aviation was establishing the McGregor Municipal Airport and he literally went door to door with his campaign to bring aviation to the area.

McGregor native Arthur Koskovik supported the mayor's effort. Inducted into the Minnesota Aviation Hall of Fame in 2001, Koskovik taught himself to fly and became a Certified Flight Instructor in 1946. Earlier he helped establish the airport in Blue Earth and for many years managed the FBO and flight school there. Those are impressive accomplishments for any aviator, but Arthur Koskovik was a polio victim and one of the first to demonstrate that people with disabilities could have a place in Aviation.

McGregor Municipal Airport had two turf runways. The site was just north of the town and kind of wet. The high water table made turf runways difficult to maintain. The east-west runway was eventually abandoned, and the north-south runway was often closed in the spring. A new paved and lighted runway was constructed in 1997 and fixed the moisture problems. Today McGregor has all-weather, year-round access to aviation.

McGregor named the airport after Isedor Iverson and the modern General Aviation facility is home to 14 aircraft. It has a 3400-foot runway with lights, Visual Approach Slope Indicators (VASI), and RNAV/GPS approaches. The Arrival/Departure Building has flight planning facilities and a meeting area. Mayor Iverson built the airport so close to town that it's an easy walk to just about everything, but a courtesy car is available if you need ground transportation. There's an automated weather station (AWOS) on the airport and the self-serve fueling system dispenses both Mogas and 100LL.

Lumbering was the original economic activity that brought folks to the McGregor area, and soon the Northern Pacific Railroad was providing service. By 1880 a station and siding had been established and the town grew up around the railroad facilities.

How this location came to be called McGregor is not especially clear. Two people may have given their name to the station. A famous trapper in the area was named McGregor and he established a water route to St. Paul for the local fur traders. There was also Major McGregor who led the railroad's survey team that mapped the route to the Missouri River in 1870.

Maybe the Northern Pacific had both people in mind when they named the station.

Forest products are still important to McGregor, but recreation has become a new economic mainstay. Big Sandy Lake offers some of the best fishing in the Midwest. The Minnesota National Golf Course is also close the airport. If you want to fly in and play 18 holes, just call ahead and they'll come pick you up. For overnight stays the McGregor area has plenty of resorts or an inn is right next to the airport.

If you like sleeping outside, there's lots of camp grounds and the airport has an "underwing" camping area. Showers are available in the Arrival/Departure Building. The city provides free wireless internet at the airport so you can stay in touch while sleeping with your airplane. If you're part of the $100 hamburger movement, four restaurants are within half a mile of the airport.

On Labor Day weekend McGregor celebrates "Wild Rice Days.". It's an event that includes lots of food, plenty of good music, a parade, classic cars, antiques and crafts. The McGregor Lions Club host a corn feed and fly-in that Sunday at the Airport.

McGregor is a little off the "main track," but you can always get there by air. That's thanks to a dedicated Mayor, and a pilot who didn't let his disabilities get in the way of being an aviator.