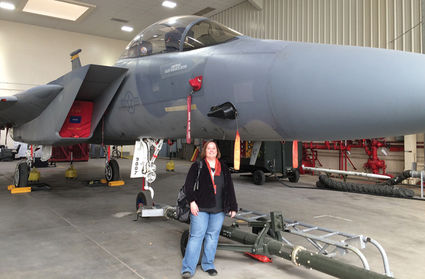 Melissa Aho standing next to one of NASA's F-15 (photo courtesy of M. Aho)

Did you know that the first "A" in NASA stands for Aeronautics? While most people associate NASA with space exploration, aviation (including General Aviation) is still important to NASA's mission. NASA is also on the forefront with social media and communicating its message in a variety of new and unique ways. In fact, it has taken its social media commitment a step further and has created NASA Social Media events.

These events are arranged around a topic (such as a rocket launch or aviation) to create excitement about NASA and their projects (free PR is always a good thing). Starting in 2009, NASA Socials (or NASA Tweetups as they were originally called) provide NASA social media followers (those that use social networking sites such as Facebook, Twitter, Google+, Instagram, Pinterest, etc.) "with the opportunity to go behind-the-scenes at NASA facilities and events and speak with scientists, engineers, astronauts and managers" (NASA.org) and then encourage them to share what they have learned on social media.

Over November 18-19, 2014, I was privileged to be accepted to attend #FlyNASA, NASA's Social Media event at the Armstrong Flight Research Center, on the Edwards Air Force Base (KEDW) in Edwards, California. The theme of this NASA social was 'Learn how NASA is with you when you fly' and participants learned how NASA contributions to aviation safety, aircraft design, and aviation research. We attended lectures and talked to NASA pilots, engineers, and scientists, we took hangers tours (housing various NASA airplanes and drones, and the occasional space paraphernalia such as a Lunar Landing Research Vehicle), visited the Experimental Fabrication Machine Shop, learned about the Adaptive Compliant Trailing Edge flexible wing flap project (we were invited to touch part of the wing flap), and learned about some of the cutting edge aeronautical technology NASA is working on, such as the Automatic Ground-Collision Avoidance System (hopefully coming to a cell phone near you).

As a pilot (I fly out of Anoka (KANE)), it was inspiring to hear that some NASA pilots come from the General Aviation community, that NASA is just as excited about aviation as they are about space, and that NASA creates technology that impacts my flying from winglets to glass cockpits to runways grooves. One take away from the event was how much people love working for NASA and when everyone said 'they have the best job in the world,' you believe them.

NASA Social events continue (upcoming events will be associated with SpaceX launches and the ISS) and you too can participate! Follow or friend NASA on Facebook and Twitter or keep an eye on their website http://www.nasa.gov/connect/social to watch for the call to participate.

Aviation, Social Media, and You

Looking to follow NASA on social media? Start with these basic sites and go from there.

On Twitter you can find NASA at @NASA, @NASASocial, and @NASAAero.

Love looking at photos of space, airplanes, and the planets then follow NASA on Instagram at http://instagram.com/nasa or want to listen to the sounds of NASA (such as rocket engines, radio waves, or missions), then follow NASA on SoundCloud https://soundcloud.com/nasa.