Ray Miller, chief pilot of the Curtiss-Northwest Company is shown in the Curtiss jenny he flew to New York to bring back loads of women's wear for the Dayton's Department Store in Minneapolis. Picture dates to 1920.

This is the fourth in a series of thumbnails of the ten most important Minnesota aviation pioneers, from the files of the Minnesota Aviation Hall of Fame.

It would be hard to discover on a more important figure in the development of Minnesota aviation than Raymond Simeon Miller. Besides being the Father of the Minnesota Air Guard, Miller's career with the new Minnesota Aeronautics Commission brought him to the forefront of Minnesota's pioneer licensing and flying rules.

Miller was born in Van Wert, Ohio, and began racing motorcycles in that state. He worked on the family farm, went through high school and entered college at Fremont, Nebraska. With the onset of WWI, he decided he wanted to be in the air service and took private flying lessons at the Curtiss School at Newport News, Virginia, joining the Army Air Service after receiving his private license.

He received his commission too late to participate in aerial action in Europe and then took leave of the service. He moved to Minnesota, where his credentials from the Curtiss Company and military service impressed William Kidder, a business entrepreneur with a pioneer flying field at Snelling and Larpenteur Avenues in St. Paul. Miller became chief pilot of Kidder's Curtiss-Northwest Company, signing on to teach flying, give sightseeing rides, make commercial flights and perform at airshows.

Kidder had a contract with the Curtiss Company to sell war surplus Jenny aircraft and one of their uses was delivering small packages to outstate persons and businesses. Sort of the Fed-Ex of its day. One of Miller's feats in 1920 was to fly from St. Paul to New York and back in a Jenny to pickup a load of dry goods for the Minneapolis Daytons Department Store.

Both Kidder and Daytons knew the value of a advertising and Miller brought back a load of ladies' stockings and undergarments. Miller landed the Jenny in a field near Dunwoody Institute in downtown Minneapolis, where the wings were removed from the plane and it was paraded back to Nicollet Avenue and ceremoniously unloaded in front of the department store. The merchandise, fresh from the fashion capitol of the nation, sold for premium prices!

Although departed from the Air Service, Miller, had joined the Minnesota National Guard as a First Lieutenant in 1919 and met regularly with other members of the Guard unit. When a notice appeared in the papers that the War Department was considering creating air units within the National Guard, Miller and his close friends hatched a plan to fly to Washington and meet with the Army Bureau to appeal for receiving a charter.

In October 1920, Miller, along with state Adjutant General Walter Rhinow, and Asst. Adjutant General, Lt. Col. Wm. C. Gareis, took off in a Curtiss Oriole biplane, rented from Wm. Kidder, and flew the distance to Washington, where their request was answered with government approval. In January1921, the unit became the very first Air National Guard unit in the country, the 109th Observation Squadron.

Miller was promoted to Major as commanding officer of the group, whose mission was virtually anything aeronautical, though organized as an aerial photography unit. They took up residence at Speedway Field, Minneapolis, later become the International Airport, where the state had constructed three large hangars for them.

Miller groomed his men to become fine pilots and led them on a number of heroic and outstanding flying missions, such as spotting for forest fires, search and rescue and public relations programs that demonstrated the capabilities of aviation. The Air Guard unit flew in many goodwill tours and staged weekend airshows. They also proved the feasibility of using air-to-ground radio communications. Miller was appointed a special deputy sheriff, promoting the use of aircraft for law enforcement. A flying field at Fort Ripley, near Little Falls, Minn. was commissioned for use of the 109th during summer encampments. The field is now named in Miller's honor.

Miller had also gone into private business, earning an insurance license and working for the Aetna Company. As a firearms buff, he earned a reputation as a crack trapshooting champion and promoted shooting tournaments, providing the trophies from his own resources. In May, 1931, Miller led the 109th to participation in a combined Air Guard meet at Wright Field, Dayton, Ohio. Miller and the 109th were part of the largest aerial grouping of military air units ever assembled to that time, flying mass formations to several Eastern cities. During this period, the 109th transitioned through several different aircraft.

In 1934, Miller was appointed Chairman of the newly formed Minnesota Aeronautics Commission. As such, he was responsible for licensing the early Minnesota pilots. Miller was tough on early pilots, insisting on their becoming licensed and their aircraft licensed by the state as well. His insistence on following the rules set by the state for flying gave him a reputation as a strict enforcer. It was a time when many private aircraft were worn out airframes and pilots generally did what they pleased. Miller supervised the installation of navigational aids and planning of commercial air routes.

By 1939, the guard unit had moved to St. Paul Airport and Miller's office was on the second floor of a hangar building built especially for the Guard. Col. John Hed remembered being sworn in by Miller as a 19-year old, whose love for aviation had led him to enlist. The unit was flying O-38 observation biplanes. Hed bummed as much air time as possible, often riding with Miller, who let him fly the airplane on occasion. He described Miller as "tall, straight, erect, and serious." Miller remained his mentor for many years and eventually recommended Hed for the position of Chief Maintenance Officer at Duluth at the 148th Fighter Wing. Miller was always his model of an officer and a gentleman. 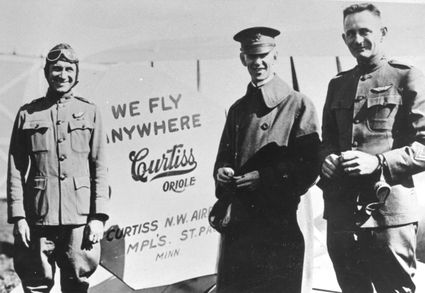 The Guard unit was called to active duty in 1941 for service in World War II. Many of Miller's pilots, also flying for Northwest Airlines were called to serve in the Air Transport Command. Miller, then a Major, was transferred to the Inspector General's Office at Wright Field where he was promoted to Lieutenant Colonel. His task was to determine the condition of Air Corps fleet of aircraft, deciding which would be sent to the scrapyards as new aircraft came on line. He went on to serve in Europe in 1945 as Air Inspector, for which service he received a Bronze Star.

After the war, Miller returned to Minnesota and the National Guard. Named Chief of Staff for Air, he was promoted to Brigadier General and given command of the newly formed 133rd Fighter Wing at Minneapolis. He established a strong recruiting program that filled out the unit's strength. Though hospitalized in 1951, he remained a stalwart supporter of the Minnesota Air national Guard until his death in 1961.

Not only was Ray S. Miller the father of the Minnesota Air National Guard, but his work as head of the Minnesota Aeronautics Commission during a critical time when the basic flying regulations for Minnesota were formulated makes him one of Minnesota's most important aviation pioneers.

My thanks to Leland Smith for his research and story in the Military Historical Society of Minnesota's paper, ALLIES, Spring, 2004. Photos from the Minnesota Air Guard via the Minnesota Aviation Hall of Fame collection.