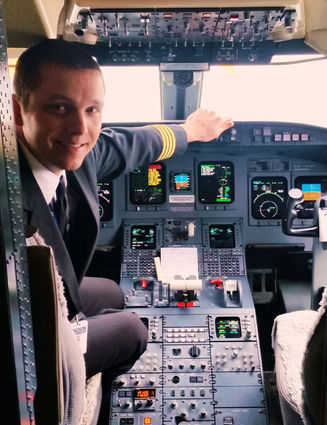 Endeavor Air Captain Lukas Eaton settles into his "office" for the day.

In dual roles as a pilot of an CRJ 900 passenger aircraft, and as a Simulator Flight Instructor, both for Endeavor Air, Captain Lukas Eaton made a presentation to students at Chisago Lakes High School at its Career Day in January. Speaking from experience, he noted that, if a person is interested in a career in aviation, the best planning begins far before college.

Eaton grew up right across the border in Ellsworth, Wisconsin where he used to watch Northwest aircraft take off and land in Minneapolis. Supporting his interest, Eaton's parents gave him flying lessons for his sixteenth birthday, which solidified the young man's desire to pursue a career as a professional pilot.

"Once I got into ground school training and flight training, I realized what it was all about," said Eaton. "I knew what I needed to do, and what I needed to not do. It definitely made an impression."

Eaton's mother was a schoolteacher. His father owned a heating and air conditioning company that his grandfather started in 1952.

"I knew how much my parents were investing," said Eaton. "I knew that, beyond just staying out of trouble, I had to do the best I could in school."

He maintained a high GPA through high school, setting the bar at a level he also maintained while attending a four-year aviation program at the University of Mankato. He also continued flying, achieving his first private pilot certificate while flying out of Redwing Airport. He started flying for the airline industry in 2007.

Eaton told students at Chisago Lakes High School that, if they want to secure a solid future, there are practical steps to take, even now.

"Take on leadership roles," said Eaton. "Be on student council. Volunteer in the community. Do anything you can to set yourself apart. Airlines look for that leadership aspect. They want somebody who is willing to go above and beyond."

There are other practical steps teens can take to begin building a career in aviation, or flying as a private pilot in General Aviation, which is also rewarding. Eaton encouraged students to arrange an introductory flight at a local FBO, or attend Aviation Career Education (ACE Camp) in Minneapolis to gauge their level of interest.

Eaton told his young audience that the airline industry is facing a huge shortage in qualified personnel including pilots, flight attendants, mechanics, air traffic control, administration, and "all the people who actually run the airlines."

He said that, anyone willing to do what it takes to overcome any obstacles to reach their goal would find a place in aviation.

"It's just a great time to get into the industry," said Eaton. "There is absolutely no doubt about it. You'll build a great career."

The pilot noted that, even though navigating corporate airline structure has its challenges, the actual job of flying for a living is very rewarding.

"My office this morning was at 34,000 feet doing 500 miles an hour in the sunshine," said Eaton. "It's a unique career, a unique profession. I'm really glad to be a part of it."