Airport of the Month: Canby 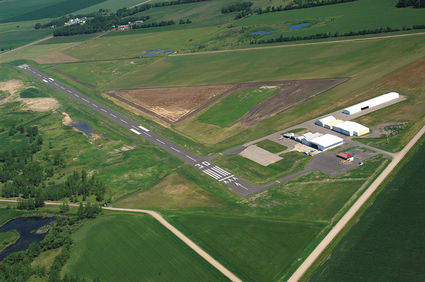 In Canby, they breed wrestlers and aviators. Sometimes both talents end up in the same person. Since 1976 the Canby High School Lancers have won 8 state titles in wrestling. Matt Wagner was on the teams that won the titles in 1994 and 1995. Now he's the Canby Airport Manager, with a "day" job flying Boeing 737s for a major airline. When a member of the 2006 wrestling team got the aviation bug, Matt told him he'd teach him to fly at no charge if they won the title. His team won the title and Tad Merrit got free flying lessons. After a 4 year All-American wrestling career at St. Cloud State University, Tad also went on to fly for the airlines.

Besides a successful wrestling program, Canby High School has an excellent technology program including aviation classes. For the last 19 years school teacher and Certified Ground Instructor Dan Lutgen has helped inspire students like Tad to be aviators. In 2013 Dan's class won an award from the General Aviation Manufacturer's Association (GAMA) for an aircraft design project.

The students got to go to the Glasair factory and help build two aircraft. Those planes ended up being purchased by the CEO's of Boeing's business jet and "Jeppesen" divisions. Both visited Canby on their way to Oshkosh in 2013 and the students got to go flying in the airplanes they worked on. Besides teaching, Dan is a pilot and a member of the Canby Airport Commission. It would make a good story better if Dan had been a wrestler, but alas he played center and power forward for the basketball team in nearby Ivanhoe. Well "banging the boards" is kind of like wrestling.

Canby was founded in 1872 and named after Edward Canby, a Civil War General who was killed in another civil war between the government of the United States and the Native Americans in California. Strangely, General Canby was never near the town named after him, or even in Minnesota.

He must have been pretty famous though, because another town in another state he never visited is also named after him. Fortunately the guy the Canby Airport's named after did live there. Dr. John Myers came to Canby in the 1950's shortly after finishing medical school. As a family doctor he was pretty busy, but found time to support community projects like a new hospital that opened in 1963 and the airport.

First constructed in 1961 as a 2500 foot turf "landing strip", the runway was paved in 1977. Dr. Myers served many years on the City's Airport Commission and flew a blue and white Cessna. Today an image of his aircraft is on the sign that welcomes you to "Myers Field".

Canby advertises itself as the "Gateway to the Prairie". Surrounded by some of the best farm land in North America, the airport has long been a hub for agricultural applicators and is currently the home of "Anderson Aerial Spraying Service." As agricultural aircraft gained in size and payload, the 2500 foot runway became less than adequate. A major power line north of the airport presented an additional challenge to heavily loaded airplanes as well as an obstacle to lengthening the runway. In the early 1990's the City started working on relocating the power line. Persistence paid off and by 2004 they were successful.

The current 4650 foot runway was opened in 2005 and features Runway End Identifier Lights (REILs) and Precision Approach Path Indicators (PAPI). When it's not great weather, there's the usual RNAV/GPS approaches and an automated weather station (AWOS). A new Arrival/Departure building opened shortly after the runway. Both 100LL and Jet Fuel are available from the self service system. You can camp on the airport and there's a courtesy car available. Myers Field is home to 25 based aircraft and there's plenty of hangar space for long term or transient use.

On Father's day weekend the Canby celebrates "Hat Daze." You'll have to figure out what that's all about for yourself, but as part of the party the airport hosts one of the best airshows in Minnesota.

Mark your calendar and go meet some of the wrestling aviators.