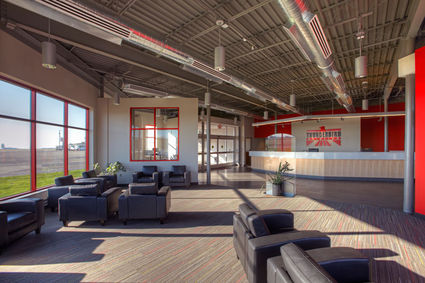 Sunshine welcomes visitors to Thunderbird Aviation’s spacious lobby with a descreet dividing wall for those wanting to concentrate on flight planning, yet have acess to the airport’s activity.

There’s an old adage that states, “Behind every successful man is a good woman. In the case of Thunderbird Aviation, the statement could be read either way. Nancy Grazzini-Olson, current president of the thriving FBO, has inherited the ability to adapt and grow business with the same level of expertise as founder Albert Grazzini, her father.

Grazzini established Thunderbird Aviation, Inc. in 1962, having applied his financial accounting and leadership skills to a struggling flying club at Flying Cloud Airport in Eden Prairie. Under his leadership, the FBO expanded its offerings to include airplane rental, sales, and flight training. Over the course of nearly thirty years, the business expanded and contracted with the challenges of the market it served, always with a fundamental core of stability.

During those years, Grazzini’s daughter was so enamored of aviation that, at age 16, she had already taken her first solo flight. Her father’s blood definitely coursed through her veins. When he was ready to step down from the business, she was ready, and able, to step up to a leadership role and the new set of challenges the business would face during her tenure.

Nancy Grazzini-Olson continued Thunderbird Aviation’s success by focusing more succinctly on flight training. In the 1990s Academy College added an Aviation program. While the college provided the academic portion, it partnered with Thunderbird for flight training.

As president, Grazzini-Olson’s leadership skills are manifested in the team she gathers to operate not only the college, but also two Thunderbird Aviation sites, one at Flying Cloud, the other at Crystal Airport.

This past August the end of her father’s era at Thunderbird’s Flying Cloud location was noted by the solemn removal of the 50-year-old building from the airport grounds. In tribute to the mettle of which her father was made, Grazzini-Olson built a new facility to serve the evolving needs of their customers.

The new Thunderbird Aviation facility at Flying Cloud Airport opened in late 2012. In a recent tour of the building, Operations Manager, Laura James explained how much planning went into the creation of the building long before designs were drawn on paper.

“We spent a lot of time, looking at other FBOs,” said James. “ We wanted to make sure that once we had the brick and mortar up that we didn’t have to change anything. It’s the little details that I think we completely nailed with the design of the building.”

Details include a glass wall in the lobby offering a highly impressive view.

“It really is the best view on the airport,” said James. “We’re center on the airport, facing south, looking at all three runways. It just doesn’t get better than that for placement.”

“This is where everyone convenes until their flights come in, all the hunters, businessmen, private airplane owners, flight students. This is where they gather. You’ll see moms and dads with their kids, and even the family dog.”

Thunderbird manifests “Minnesota Nice” by offering free popcorn and free bottled water. They also keep all customers’ car keys so when a plane comes in, staff will brush snow off the vehicle and start it so it’s warm. Customers are also handed a complimentary bottle of water.

“They love it,” said James. “There’s nothing like getting off a crammed airplane with all your gear and finding a warm truck and cold water. That’s something we enjoy doing. It’s giving that extra little punch. 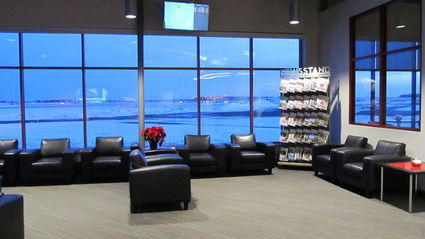 At dusk the lobby windows provide a serene outdoor view while reflecting the welcome services available at the front desk.

“Honestly, when it comes to the General Aviation side,” said James, “We dabble in it all. If you want to learn how to fly, we provide instructors. If you just want a trip somewhere, we can do the charter. If you own an airplane, we can provide fueling and maintenance. If you need to store it, we can store it for you. So, what ever it is, we find a way.”

One can easily imagine these very words spoken in the past by Albert Grazzini, or more recently by Nancy Grazzini-Olson, a father daughter team who not only inspired each other, but also the entire team at Thunderbird Aviation.