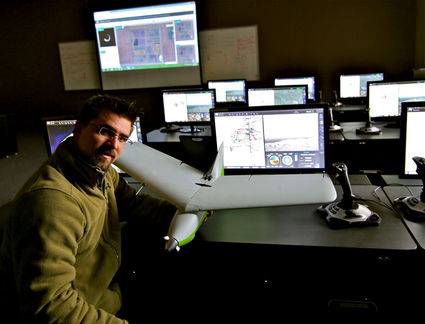 If you want to fly anything in a farmer's field, it is best to make the farmer aware of your plan. When Northland Aerospace, based at Northland Community & Technical College (NCTC) in Thief River Falls began devising a plan to fly Unmanned Aircraft Systems over the vast fields of Roseau, Minnesota to gather agricultural ground images, that is exactly what they did.

Prior to anything becoming air born, Dave Grafstrom, NCTC's Farm Business Management representative from the Roseau satellite location began communication with a network of local growers. He also established contacts with the Minnesota Wheat Growers and the Minnesota Turf Council.

At the same time, Northland Aerospace representatives attended the county commissioner's meeting to provide an awareness of the impending project. In addition, the local aviation community was informed, specifically crop dusters who spray in that area.

Then, of course, there was the matter of obtaining the FAA Certificate of Authorization giving approval to fly specific aircraft in an identified location under a certain set of requirements. Northland also filed NOTAMs with the FAA so any pilot flying in the area could see exactly where the UAS was operated on any given day.

All this in preparation to hand launch a four pound UAS with a 38-inch wing span which flies up to 500 feet high. The UAS is equipped with two cameras, one that takes a standard photograph, the other uses Infrared technology. The operator continually maintains a visual line of sight with the aircraft and is responsible to de-conflict should other air traffic come in the area.

After all compliance was in order, at the beginning of this past summer, the UAS was launched. Over the course of the summer over 3,000 agricultural acres were photographed, some multiple times. The UAS flew about an hour flight time per launch, allowing coverage of 160 acres of farmland per flight.

According to Northland's UAS Program Director Jon Beck, the primary purpose of the summer project was to establish an operational footprint, to work out compliance with the FAA, to fully understand the operations of the system, and to start building a database of agricultural imagery to be used for content in Northland's Imagery Analysis Program.

"Some of the practical applications we've been taking a look at over the summer period were weed mapping, and detecting different pests like soybean aphids," said Beck. "Another aspect of collecting data is discovering what can be determined about plant health from the coloration seen from aerial images of the field."

Integrating that content into the Imagery Analysis Program at the college will, in turn, develop processing skills for a student who could potentially generate a weed map that an individual grower could plug into an applicator vehicle making it possible to spot spray affected areas in their field.

However, Beck stated that the project has just moved from the concept stage to the development stage, transforming with each bit of information gathered.

"At this point I think the agricultural industry is still trying to figure out how to fully integrate unmanned aircraft systems," said Beck, "whether that's going to be at the grower level, or if that's going to be another service that implement dealers provide, or if there will be external companies that actually perform the operation of flying the unmanned aircraft systems. The question then becomes, who is actually going to process that information to turn it into a useable resource for agricultural management decisions?" 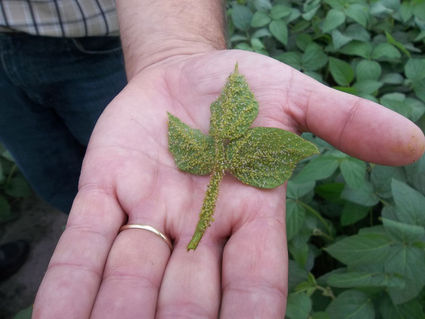 A soybean leaf with a heavy concentration of aphids can be detected from UAS NIR Infrared Camera images.

As the old adage says, only time will tell.

"The future is going to be full of new development we can't even conceive yet," said Beck. "As we begin the integration of UAS technology, as we start looking at the different applications, it will just evolve.

"We are aware that current system have been around for a long time. There are people who don't want to be disrupted by new technology, which is a very important thing to consider as we work through the integration. We already know there's been a rapid evolution in this specific technology, especially over the last year. Moving forward, that's just going to continue. "

Though details of the final destination of UAS technology may be unknown at present, it can be said that Northland Aerospace is absolutely enamored of the trip.