Airport of the Month: Crystal 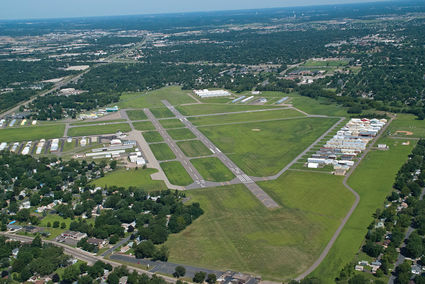 Charles Dickens opening lines from "A Tale of Two Cities" is about the French Revolution, but the quote could easily be describing the recent history of the Crystal Airport. Opened in 1946 as a privately owned airport, Crystal was purchased by the Metropolitan Airports Commission (MAC) in 1948 and is surely the most "urban" airport in the MAC reliever system. The airport is literally surrounded by development. During the "worst of times" there was a lot of pressure to close the facility. Yet Crystal Airport survives and should keep on functioning for quite a while. MAC has taken steps to insure that future including some rather expensive obstruction removal projects. Those projects have resulted in the current clear approach surfaces, and a much safer airport. Working with the adjacent communities to secure local support, MAC has also developed a Long Term Comprehensive Plan (LTCP) for the airport.

Aviation in the Crystal area has a long and interesting history. In 1920 Eugene Shank moved his flying service to an open field at West Broadway and 49th Avenue, about a mile southwest of the current airport. He operated his flying service and flight school there before joining Northwest Airlines. Shank's Flying Service was gone by the start of World War II, and the site of his airport is now a city park and a memorial garden. Several flight schools, charter services and repair stations have done business at the "new" airport. Crystal Shamrock was one of the more colorful operations using a fleet of DC-3 airliners for charter flights, in addition to the usual flight school and FBO activities. The oldest active business at Crystal is Maxwell Aircraft Service, also known as "The Prop Shop". It was founded by Ken Maxwell in 1946, moved to Crystal in 1951, and still provides first class service. The current FBO is Thunderbird Aviation offering flight training, charter, fuel, and aircraft repair. A self-service fuel system is available, if you want to pump it yourself. Wentworth Aircraft, one of the largest aircraft salvage businesses in the county, is now located at the Crystal Airport.

Another long term tenant at Crystal is the North Hennepin Squadron of the Civil Air Patrol. Originally organized at the old Robbinsdale Airport in 1942, this was the first CAP unit to have both senior and cadets members. Today the squadron has 46 adults and 41 cadets. CAP cadets are young people between the ages of 12 and 21, and some of the squadrons senior members have been CAP volunteers for 40+ years. One of the cadets from 1942 is Tom O'Connor, still a member of the CAP and a Lt. Col.

Crystal has all the facilities that smaller General Aviation aircraft need, but it must have been a real adventure for the DC-3 pilots. There are 4 runways in 2 parallel sets (14-32 and 6-24) the longest of which is 3200 feet. Runways 14L-32R and 6L-24R are lighted. Runway 6R-24L is turf. The airport has a control tower and weather station. There are VOR and GPS/RNAV approaches. Crystal is home to about 235 airplanes, and there's hangar space available for both transient and long term storage.

Recent development near the airport is can best be described as "progressive" and includes lots of eating places. If you're flying for fun there's plenty to do in the neighborhood. If you're traveling on business Crystal, is a very convenient gateway to the northwest part of the Twin City area. Car rentals, taxis and bus service provide ground transportation.

A Father's Day open house is an annual tradition at the airport, an event that in the last few years has generated lots of support from the neighbors. Hopefully it's a good indication that the Minneapolis/Crystal Airport is again experiencing the "best of times."