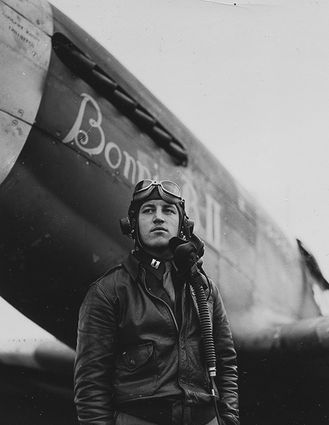 "They heard the sound of an airplane and then an explosion. Racing out of town the youngsters quickly came to the crash site in a wheat field a kilometer away."

On August 9, 1944, the Ninth Air Force's top ace led 16 P-51 Mustangs of the highly acclaimed 353rd Fighter Squadron in a low level strafing attack against a former French airdrome near Saint-Thierry, France. Tucked amongst vineyards and farmland in the province of Champagne, the village had been in the path of invasion three times since the Franco-Prussian War of 1870-1871. The airdrome, Base Aerienne 112 (BA 112), lay 75 miles northeast of Paris.

In early August, two months after the D-day landings, the Allies were on the verge of finally breaking free from the enemy's skillful defense of the hedgerow country in Normandy. Lieutenant General George S. Patton's Third Army, supported by units of the Ninth Air Force, had smashed through the Axis lines near Avranches. On August 7, as Patton turned east in a potential flanking movement, the Wehrmacht hit the First Army at Mortain in an effort to split the American forces. The outcome of the counterattack was uncertain when Major Beerbower made the decision two days later to strike 30 Junkers Ju-88 twin-engine fighter-bombers caught in the open at BA 112. On his second pass deadly fire from a Luftwaffe anti-aircraft crew brought down the 22-year old and Bonnie "B", the Mustang he named after his daughter. The squadron commander died about mid-morning local time in a farm field within eyesight of Saint-Thierry's 12th Century church. The owner of the farm, Mayor Marcel Lemaire, hurried to the scene of devastation.

On September 9, 2014, Saint-Thierry Mayor Antione Lemaire, grandson of Marcel Lemaire, commemorated Major Beerbower's sacrifice at a remembrance ceremony held outside the ancient church. Along with approximately 200 others from France, Britain, Canada, and the United States, I felt privileged to be in Saint-Thierry to pay tribute to Major Beerbower. I was honored to say a few words about his life of courage and duty, about his wife and child left behind. The ceremony held special meaning for flying officers from the French Armee de l'Air, and former military pilots and crew members from the Royal Air Force, U.S. Army, and U.S. Air Force who were present to salute the bravery of a fellow aviator.

After the playing of The Star-Spangled Banner, school children waving American and French flags burst into song with a heartwarming rendition of La Marseillaise. Many of us shed tears as the boys and girls sang of "liberty, cherished liberty." The ceremony concluded with the removal of a flag covering the commemorative plaque. Mayor Lemaire asked that I deliver the folded, glass-encased flag to Major Beerbower's daughter Bonnie Hansen of Cohasset, who was unable to attend because of poor health.

Guy Perron, a quiet, serious man, came to the ceremony from his home in a neighboring community. On August 9, 1944, he and another 14-year-old boy were riding their bicycles in Saint-Thierry when they heard the sound of an airplane and then an explosion. Racing out of town, the youngsters quickly came to the crash site in a wheat field a kilometer away. Monsieur Perron learned the American pilot's name after reading a newspaper article announcing the dedication of a plaque for Major Beerbower. With the dreadful childhood event still a vivid memory, he felt compelled to come to Saint-Thierry. Later, Monsieur Perron took several of us to the site, explained what he observed, and described the aftermath when the Germans arrived to remove the remains and the aircraft.

Toward evening Jean-Pierre Calka, co-author of a book about the one hundred year history of BA 112, hosted American, British and French guests at the air facility east of Saint-Thierry. BA 112 had been closed in 2011. Standing in the middle of the runway not far from World War II era hangars, Monsieur Calka explained the position of flak emplacements around the airdrome in 1944. 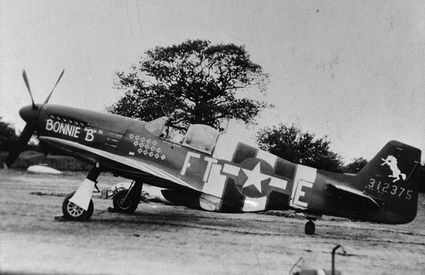 In our mind's eye we could imagine the sound and fury of the attack. Then, in a very personal moment, he told us how deeply the people of northern France feel about the price paid for their freedom. The reminders of what has happened to them and for them is evidenced by thousands upon thousands of German, French, British, and American graves scattered in military cemeteries all over this part of France.

"The commemorative plaque for Major Beerbower," he said, "will always be a reminder of the Allied lives lost for us in World War II."

The Oranges are Sweet: Major Don M. Beerbower and the 353rd Fighter Squadron – November 1942 to August 1944