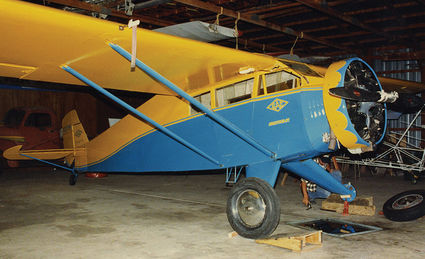 Praised by Lady Mary Heath, Britain's "Lady Lindy" in a February 1929 issue of Aviation magazine for its "ease of handling and balance of the controls," the Aristocrat was a product of General Airplanes Corporation of Buffalo, NY. Powered by a 110 hp Warner Scarab seven cylinder radial, it appeared at the 1929 Cleveland Air Show. Eight were purchased by the General Tire and Rubber Company for its 50,000 mile, four month US tour in late 1929 and one, registered X7511, was donated to polar explorer Richard Byrd. Byrd's Aristocrat was flown from the Buffalo plant by the legendary arctic and transatlantic pilot Bernt Balchen. It was painted green and emblazoned with the title "Byrd Antarctic Expedition" on its fuselage.

With a fabric covered steel tube fuselage, wooden wings, and an engine starting crank in the forward cabin, the Aristocrat was a three seater, produced under Approved Type Certificate # 117 of March 1929. Top speed was a respectable 109 mph, with a range of 490 miles. A more powerful development of the Aristocrat was the 102E with a 165 hp Wright Whirlwind that boasted a top speed of 128 mph. General produced a couple Model 11C Cadet parasol wing trainers, but in late 1930, the effects of the Great Depression were too much. It went bankrupt in May 1931.

NC278H was photographed at Blakesburg, Iowa, in August 1988. At the time, it was in the Airpower Museum. It had been restored by Francis Rourke of Bartlesville, OK, with a 220 hp Continental in 1986 as an Aristocrat 102F per Group 2 Approval #232 of 3 July 1930. In 2003 it was purchased by Les Deline and based in San Diego. The only surviving Aristocrat, it has been repainted in black and yellow and is now listed to William Field of Pleasanton, CA.

This month's winner is Dallas Bee of Bloomington who knew I'd photographed the Aristocrat at Blakesburg, IA. Thanks to all the Sawbones supporters who visited the pit for the 2014 National Championship Air Races at Reno. Race #71 finished 4th in Sunday's Gold. Blue skies and fair winds.