Airport of the Month: Olivia 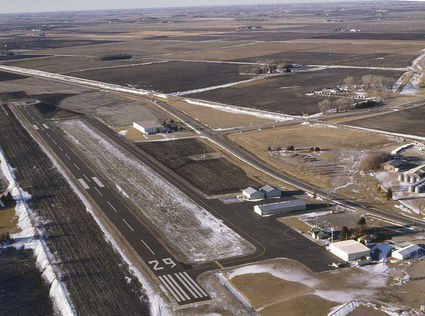 Olivia claims it's the "Corn Capital of the World". Not just Minnesota or the United States, but the entire world. When you fly into the Olivia Regional Airport in the summer you'll see a lot of corn growing, so the reason for the claim might appear obvious. However, the amount of corn growing isn't the only reason Olivia is the world capital. Olivia is home to no less than nine research facilities dedicated to improving production of the cash crop that's essential to the farm economy in the upper Midwest. There's also two major corn seed production companies in town and the world's largest corn seed brokerage is also located in Olivia. Naturally agricultural flying is a major part of what goes on at the Airport, and the City has a nice new "taxi thru" hangar that's used for loading ag-planes in an efficient and environmentally acceptable manner. For many years long time Olivia Airport Manager, Dale Hardy, was flying one of those planes.

Dale grew up in North Dakota and was "fascinated with aircraft." Unfortunately his parents didn't share his enthusiasm, and weren't too supportive of him flying. So Dale waited until they took a vacation, crammed in a bunch of flying, and soloed before they got back. He started managing the Olivia Airport in 1974, about two years after it opened. He also founded Olivia Flying service and was a dealer for Cessna agricultural airplanes. Dale retired in 2011 after a long career in Aviation, but still likes to "hang-out at airports" and spends his winters in Mesa, AZ with some other Minnesota aviation notables.

Other than the hangar, the rest of the airport facilities are pretty conventional. There's a 3500 foot long paved and lighted runway that should handle 90% of the General Aviation fleet. GPS and VOR/DME approaches make all weather access possible, and an automated weather system (AWOS) is located on the airport. A partial parallel taxiway provides access to the parking apron and the hangar area. Flight planning and meeting space are available in the Arrival/Departure Building which is open 24 hours a day, 7 days a week. Olivia Flying Service offers aircraft maintenance and sells Aviation Fuel. There's a brand new "Tee" hangar that has space available for long term storage. Local automobile rentals are available for ground transportation, or the City has a courtesy car available if you call ahead for a reservation. You might not need wheels though, lots of good stuff is within easy walking distance of the airport.

About 1870 Albert B. Rogers was the chief engineer for the Milwaukee and St. Paul Railroad. He was given responsibility for naming new stations which normally resulted in the associated town having the same name. Albert had a "particular friend" named Olive who was the station agent in Ortonville, and who inspired Mr. Rogers to name the future "Corn Capital of the World" Olivia. There's giant ear of corn in town, and of course the local celebration in Olivia is "Corn Capital Days". It's held in July and includes a fly-in breakfast at the airport.

If you arrive on a less exciting day and want to eat, there's two restaurants in walking distance of the Airport. Since Olivia does have a certain resemblance to the fictional "Lake Woebegone", it has a café named the "Chatterbox" that's only 300 feet from the Arrival/Departure building. A motel is less than ¼ mile from the airport, or you can use the airport to camp on. The historical society offers maps for self-guided walking/driving tours that include the newly renovated Renville County Court House with its copper roofed domes that was built in 1902. There's a first class golf course, the City has seven municipal parks, and of course you have to see the 50 foot high corn monument in Memorial Park on US Highway 212.

The folks in Olivia promote their City as, "...... an attractive country town where people are friendly and helpful". It might sound corny, but it's true. And best of all, they have a really attractive airport you can use to get there.