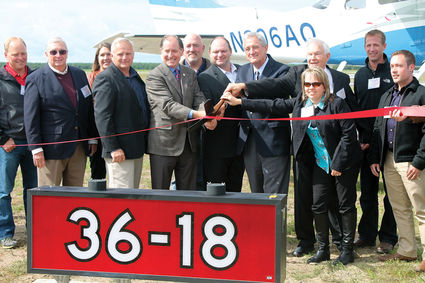 The official ribbon cutting with all the dignitaries.

The new 75-foot by 3,500-foot paved and lighted Runway 18-36 replaces a turf runway, allowing the airport to offer improved year-round operations and land aircraft in nearly all wind and weather conditions.

"The new crosswind runway is all about safety," said David Konshok, Park Rapids Airport Commission Chairman, longtime pilot and namesake of the airfield.

In Park Rapids, crosswinds can at times exceed capacity of smaller aircraft. The turf runway was only available for seasonable use, and only by small aircraft. As new, faster aircraft come into the market, the paved crosswind airstrip positions Park Rapids well for future growth.

"This is the wave of the future," he said. "Aircraft are becoming more and more sophisticated, they are lighter and faster, and they respond better and are able to land more safely on a hard surface."

"The navigation aids, the lighting, the improved taxiing, all make this a safer place to land for all users," Konshok said.

In recent years, the airfield has seen growth in both the business and pleasure markets. The facility has noted a trend of increasing numbers of business pilots, flying very sophisticated private jets, using the field. In addition, the area is a popular vacation destination and attracts private pilots flying in for pleasure trips.

Improving the airport to support this increased traffic was a multi-year endeavor.

TKDA, the St. Paul-based engineering, architectural and planning firm, worked closely with Park Rapids city staff and its Airport Commission on this project.

"TKDA has been an excellent partner for our airport for a long time, 20 or 30 years," Konshok said. "They were a very important part of this project and they supported us all the way through."

As operations increase and funding becomes available, the airport will keep growing. The new runway, currently at 3,500 feet, is an intermediate landing strip. Plans are to eventually extend it to 4,100 feet to make it accessible for larger aircraft.

"We were proud to work along with the City of Park Rapids and the Airport Commission on the improvements to this essential airport," said John Peterson, TKDA's Greater Minnesota Airport Market Manager. "These upgrades improve safety and contribute to the airport's first-class reputation."

Konshok, 88, who has countless hours as a private pilot, flying with the Civil Air Patrol, as well as for both business and pleasure, is delighted the project is complete and safety has been increased at the airfield that bears his name.

"This project brings the airport up to snuff and the more we improve it, the more possibilities it has," he said.