Airport of the Month: Alexandria 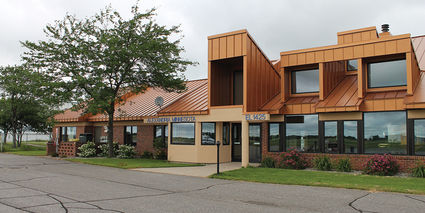 There's lots of fun to be had in Alexandria. That's Minnesota not Egypt, although the Midwest town was named after the one in the Mideast. There's enough water in the area to keep any boater happy, plenty of fishing, lots of camping spots, and all kinds of good eating places.

PGA Champion Tom Lehman's from the area, so naturally there's a lot of golf too. Seven public courses are within 15 minutes of downtown. Besides that, there's "Big Ole" and the Rune Stone Museum. Best of all you can fly to Alexandria and land at a great General Aviation airport with everything a pilot could want, including camping spots.

Alexandria Aviation is a full-service FBO with 24-hour fueling and a heated hangar for indoor storage. There's also a flight school and aircraft repair services. Almost anything in the GA fleet should be able to use the airport. The primary runway is 5100 feet long with an Instrument Landing System (ILS) and approach lights. The second runway is 4100 feet. Both runways have "Precision Approach Path Indicators" or PAPI, and "Runway End Identifier Lights" or REILs. There's a full taxiway system and plenty of apron space.

"Back in the day," Alexandria had a Flight Service Station, but of course they're all gone. The Alexandria FSS has been replaced by an automated weather system (AWOS) and a remote communications outlet (RCO). Alexandria's Arrival/Departure building is delightful. It looks good and has all the facilities including plenty of meeting space if you happen to be there to do some business. After landing, a courtesy car or a taxi service can get you where you need to go.

Big Ole is a 25 foot tall fiberglass statue of a Viking and the Rune Stone is reported to be a record of the Norseman walking to Minnesota from Labrador about 1000 years ago. By the 1920's it had been determined that flying was a better way to get to Alexandria than walking, so an airport was started that was known as Raiter Pasture. Eventually two turf runways were constructed and there was some serious flying being done. As World War II approached, the Army Air Corps discovered that Alexandria was about in the middle of North America making it an ideal refueling station for aircraft being ferried across the county. In 1940, they took over the airport and by 1943 had built the two paved runways that are still in use. The military stayed until 1950 when the city took over the operation. While all that was going on back home, two flyers with past and future ties to the Alexandria area were making big contributions to the war effort overseas.

Richard A. Peterson might be best known as the architect who designed the Minnesota Zoo in Apple Valley. But during the War, Major Peterson was a top scoring ace with the 8th Army Air Force. He scored 15 victories in his P-51s, all named "Hurry Home Honey." That's how his future wife, Elaine, ended her war time letters to him. Also known as "Bud", Major Peterson flew with Chuck Yeager in the 357th Fighter Group. They had such a sterling reputation escorting bombers, that the crews of the heavies called them the "shepherds of the sky". For his heroism, Major Peterson was awarded the Silver Star and the Distinguished Flying Cross by the United States, and the Croix de Guerre by France.

Harold Chandler learned to fly in the 1930s and during the War was a pilot for the Air Transport Command or ATC. Most of his missions were medical evacuation flights in the Pacific Theater. After the war, Harold went back to civilian flying. His work included charter flights, instruction and aerial application. In 1962 he moved to Alexandria, became the airport manager and operated Chandler Flying Service. He accomplished so much that the Alexandria Municipal Airport was named "Chandler Field" in 1978.

Chandler was the 1964 Minnesota Airport Manager of the year and served as president of the Minnesota Aviation Trades Association (MATA). When asked about his hobbies and the seven day a week demands of airport management he responded, "who needs hobbies when I enjoy it here more than any place else." Other pilots must like it too. Alexandria is home to 57 aircraft.

So if you're heading to Alexandria don't walk like Ole and the other Vikings did. Fly to Chandler Field and save some time. You just might enjoy being there as much as Harold Chandler did.