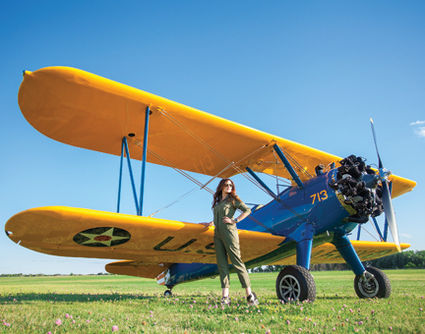 John F. Hanson shares a photo featuring his daughter, Catherine Sheppard, show is a fashion stylist based in Los Angeles. The photo was taken by Ian Sheppard, her husband who is a semi-pro photographer.

The Stearman is one of the most classic biplanes in history. Designed by Lloyd Stearman in the 1930s, the Stearman line evolved through several different engines, landing gear types, cowling configurations, and indeed even corporate managements.

The most common model produced after Stearman became "Boeing Stearman" on April 1, 1938 was the Boeing Model 75. The physical lines of that model can first be seen in the model 70, which appeared in late 1933. As the clouds of worldwide war formed in the 1930s, the Boeing Model 75 production line ramped up in earnest in 1938. The classic biplane was frantically produced in large numbers over the next several years to meet the wartime pilot training needs. Eventually, according to Stearman/Boeing publicity, 10,346 examples of the various 70-series variants were produced and used by the USAAF, USN, and several foreign countries. Even though those wartime models are technically "Boeing Stearmans," they will always be known to enthusiasts as simply "Stearmans," or their wartime nickname "Kaydets."

More of these biplanes were produced than any other American biplane ever, surpassed in numbers only worldwide by two Russian biplane types. The Stearman holds as much an iconic status for biplanes as the Piper Cub does for monoplanes. Indeed, most of the USAAF and USN pilots in World War Two received their primary training in some variant of the Boeing Stearman Model 75. Entire books have been written detailing the various versions of the model 75, but they all are siblings, whether they are Army PT-13s, PT-17s, PT-18s, PT-27s, or Navy N2-S-1s, N2S-2s, N2S-3s, N2S-4s, or N2S-5s. Indeed, from the firewall back, they are all basically the same Model 75, with only some minor differences. Suffice it to say here that the various designations referred to whether the particular plane was Army or Navy, and which engine was on the nose.

Immediately after World War Two, thousands of the surplus Model 75s were released for sale to the public through the Reconstruction Finance Corporation, for the bargain price of several hundred dollars each. The particular PT-17 Stearman owned by the author originally cost the government $9,176 (corrected for inflation, this equates to $149,420 in 2013 dollars), yet the records show it sold to a private owner only four years later for $543 (equates to $7,004 in 2013 dollars) in November, 1945! These thousands of still-very-useable aircraft were about to enter second lives.

These planes were originally intended to train pilots, and that's what some of them continued to do after the war. Several of the same ships that taught the fighter aces and bomber pilots to fly during the war continued on in that role, serving as trainers for the many civilian would-be pilots, although they saw stiff competition in this purpose from the Piper J-3s, Cessna 120/140s, Luscombes, Aeroncas, and Taylorcrafts that were beginning to flood the market in 1945. Those planes were much cheaper to maintain and operate than the Stearmans.

A far bigger area of use for these wartime workhorses was found in the area of crop dusting and spraying. The famed load carrying ability and ruggedness of the Stearman Model 75, and the copious supply of cheap surplus spare parts available, fairly screamed for its conversion to aerial application. A few modifications were needed, the most obvious being the addition of a spray or dust tank in the front cockpit and a spray or dust rig under the wings, and the replacement of the Continental or Lycoming engine with a 450hp Pratt&Whitney. The author's plane, N985, was part of this crowd, seeing use for years as a duster/sprayer before its eventual restoration back to a showpiece civilian example of a stock PT-17.

The Stearman's versatility and ability to take a beating, coupled with its wonderful handling characteristics, led to many varied uses in air shows and movies. Since they were readily available at bargain prices, and could be painted in a variety of ways to resemble everything from World War One fighters to brightly painted air show ladies, Stearmans were (and still are) very popular among aerobatic pilots and movie producers. The P&W 450 gave the plane the power it needed to lift huge amounts of agricultural chemicals, and also supplied the power, noise, and smoke that pleased air show crowds everywhere. The ability of the airframe to take a beating and still protect the pilot led to its being used in movies, where it could be intentionally crashed before the cameras, yielding thrilling footage for the screen. Yes, before the age of computer-generated action shots, this was the only way to do it, and a few daring stunt pilots risked their lives (and destroyed a Stearman in the process...) to get those crash scenes on film!

The agricultural and show life of the Stearman thrived well into the 1990s. The modern dusters and sprayers have gradually replaced it in recent years, while the Stearman still remains a favorite at air shows.

However, now 70-plus years of age, most Stearmans are appearing as valued collector's items. They are being lovingly and carefully restored to museum quality, and are still flown on sunny afternoons. The author's Stearman falls in this category. The financial commitment and labor required to maintain a 70-plus year old historical artifact are considerable, but the rewards are great. There is nothing like a Stearman on a grass runway, under a blue sky!

The author's Stearman, N985, is an A75N1 (PT-17) originally made for the U.S. Army in October, 1941. Its service life began at Maxwell Field, Montgomery, Alabama, which was the dispersal point for airplanes assigned to the Eastern Flying Training Command. After only a week, on November 7, 1941 it was dispatched to its first training base, a Contract Pilot School at Palmer Field, Bennettsville, South Carolina. It was based there for a little more than a year. On January 15, 1943, the plane was assigned to a Contract Pilot School operated by Southern Airways in Decatur, Alabama, where it was extensively used for training until July 2, 1945. It then was retired from active military service and sold as surplus for $543.

Two enthusiasts in Bloomington, Indiana, Dr. William Nice and Scott Ackerson obtained N985 and they in turn had the plane lovingly and completely restored back to stock military configuration by Scott White and his crew at White Aero Ltd. The award winning restoration was completed in September 2007. The author purchased the plane from Dr. Nice in 2013. The engine is a Don Sanders restored Continental 220, and the author runs two props on it, a McCauley ground adjustable metal prop, and a Sensenich wood prop, both of which appear in the photos that accompany this article. Maintaining a vintage biplane of this caliber requires a very specialized level of experience and knowledge, and the author has N985 maintained by the very capable folks at Rare Aircraft in Faribault, Minnesota.