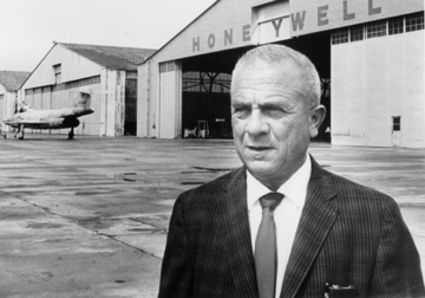 The Honeywell Hangars. De Ponti leased these from the MAC in the 1970s and sub-leased them to Northwest Airlines for maintenance. They were nicknamed the "Shakopee" hangars because they were so far south on the airport.

This is the second in a series of thumbnails of the ten most important Minnesota aviation pioneers, from the files of the Minnesota Aviation Hall of Fame.

In the first part of this series, we profiled Clarence Hinck. Like Hinck, Shorty De Ponti gets his claim to fame by virtue of being one of the most aggressive aviation business figures to color our State's past. De Ponti was born in St. Paul in 1909. He was born an entrepreneur! He began his business career at age nine as a paperboy and as a teen-ager, he was trusted with a lamplighter's job in St. Paul. It is said he lit as many as 240 lights a night. He worked in a bicycle shop, joined a road-construction crew in Winona, and fascinated by the sight of an airplane flying overhead, began hanging around Curtiss-Northwest Field in St. Paul and Speedway Field in Minneapolis. He was put to work at Minneapolis as an errand boy, airplane degreaser, floor sweeper and general helper. By age nineteen in 1928, he had become a lineboy for Minneapolis-based Universal Airlines Flying School. Later, that same year, he decided to strike out on his own, leasing space from Universal to sell their inventory of used airplane parts. His company was named Minnesota Aero Salvage Co.

In 1929, De Ponti took on a partner, Anton Jacobson, and the two leased space in the old 1920 airmail hangar, recently vacated by Northwest Airways. The hangar sat in the middle of the infield of the old racetrack known as Speedway Field. There, the parts business flourished. De Ponti and partner soon leased the entire hangar, and sub-leased space to the Mohawk Aircraft Company to assemble their airplanes. When Mohawk folded in 1931, De Ponti bought their parts inventory. With the entire hangar available, De Ponti began offering rental space, flight instruction, aircraft repair, and charter flights. Many of the early Minneapolis-based flyers worked for Shorty, or rented from him.

In 1933, De Ponti bought Northwest's westside hangar on 34th Avenue, thus having two buildings under his ownership. He accumulated a large stable of training planes and lease aircraft. He owned a Ford Trimotor among others, and local pilots gave weekend sightseeing rides over the city.

In 1937, De Ponti acquired one of the first Piper Aircraft distributorships in the country. He would hold the Piper franchise for 24 years, many of those years being the top Piper dealer in the country. Piper Cubs sold so well that "Shorty" as he was now known, was able to buy the two old Universal Airlines hangars and assumed the Texaco fuel dealership. He eventually owned or leased nearly all of the early buildings on the field, now named Wold-Chamberlain Field. Just prior to WWII, Shorty trained pilots in the CPT and WTS wartime training programs.

With the coming of WWII, the field was taken over by the US Navy. Airlines and other flight schools were made to leave the field to make way for military activity. But, Shorty stayed. His Universal hangars became the assembly point for 1325 Waco CG-4A combat gliders. Shorty was making the fuselages and tail surfaces for the gliders in leased buildings in South Minneapolis. Shorty's hangars were designated by the US Army as the official repair station for a large fleet of civilian and military aircraft commandeered by the U.S. government.

None other than Jimmy Doolittle tipped Shorty off to the fact that the military would be purchasing only Shell oil and gas for their training planes and transient warbirds passing through Minneapolis. De Ponti wasted no time in acquiring the local Shell Oil franchise to go along with his Texaco franchise. Thanks to the thousands of gallons of fuel the military contracted for, Shorty De Ponti became a wealthy man. At one time during the war, he employed as many as 450 persons in his businesses on the field and at the glider production facility in South Minneapolis.

Of course, with the end of the war, came the large numbers of young men and women wanting to learn to fly and to earn their civilian licenses. De Ponti continued his leasing of buildings and providing services. His shops modified warbirds for national air races. De Ponti kept leasing more buildings, including the huge Naval Research Hangar that was built at the very Northwest corner of the airport, which most readers will remember. The hangar was torn down in 1977, but was the largest landmark on the field until the new terminal and ramps were built in the 1970s. In 1971, De Ponti gambled $350,000 of his own money to outfit his exclusive business of servicing the new Green Concourse, or Gate 35 as it was called. In 1973, De Ponti had spent his career as one of the top Minnesota entrepreneurs. He had been able to purchase an enormous ranch north of the cities where he raised horses. He had run a respected business and retired from active participation in aviation to live out his remaining days with his wife Bernice near White Bear Lake.

Angelo "Shorty" De Ponti had seen the Minneapolis-St. Paul Airport grow from a defunct auto racetrack to an International Airport. Thanks to his enthusiastic effort and astute business skills, the airport flourished. More than any other person, De Ponti's name is associated with the entire history of Minneapolis-St. Paul International Airport. The Minnesota Aviation Hall of Fame considers De Ponti one of the most significant aviation figures in our state. De Ponti was inducted into the Hall of Fame in 1989.