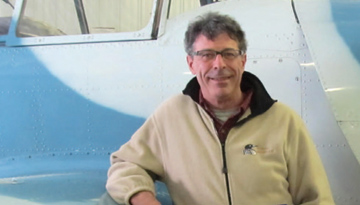 It's been said that like attracts like. In the case of Aero Minnesota, that adage is proof positive regarding president, Adam Forsberg and restoration aficionado, Dan Dolliff.

Curiously enough, the two were brought together by an urgent need, a sense of service, a measure of respect, and a penchant

for vintage aircraft. The story begins with an urgent need.

In 2010 Dolliff was sitting in a closing for a land purchase when, much to his dismay, it dawned on him that he wasn't carrying any identification.

Enter service. Though a mutual acquaintance, Forsberg provided a flight for Dolliff to pick up his ID.

"Instead of the whole land deal crashing," said Dolliff, "I was able to make the purchase."

Though the two met due to circumstance, it was mutual respect that drew their lives together.

At the time of their first meeting, Forsberg was building hours towards his commercial licensing. He welcomed the opportunity to fly even though, under FAA rules, no fee could be charged.

"He told me I couldn't fly an airplane for free," said Forsberg. "I told him, I just did."

"When he first helped me with retrieval of that ID," said Dolliff, "I told Adam, I really think you're going somewhere. You're just a natural.

"I had no idea at the time that things would just start to come together."

Enter a penchant for vintage aircraft.

"I have restoration in my blood," said Dolliff. "It started with my dad and old cars.

"It's just the beauty of planes themselves, any age and class, though I really like the 50's era Bonanzas."

Dolliff and Forsberg kept in contact, eventually discovering their mutual interest in aircraft.

"It just kept going step by step," said Dolliff, "until, one day we were sitting at a coffee shop during the middle of the winter

three years ago at a time when I was ready for an opportunity."

Additionally, A.E.R.O. is the public non-profit side of Aero Minnesota, the

brainchild of Dolliff and Lanie, his wife.

"One of the things we're most eager to expand is the non-profit, " said Dolliff. "Education can be the unsung hero for the business as a whole."

"You just kind of go with it," said Dolliff. "There hasn't been any fork in the road where I've felt like it wasn't the right decision. It just keeps expanding.

"Somehow it was like a miracle that we were all on the same channel. We just enjoy people in general. The planes are just the icing on the cake."