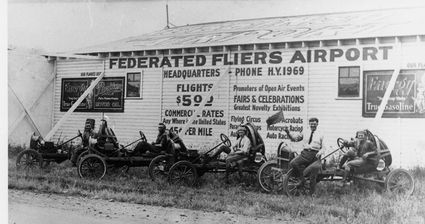 This is the first in a series of thumbnails of the important Minnesota aviation pioneers. It is my intention to profile the persons who had the greatest impact on bringing aviation to the public in our state from the files of the Minnesota Aviation Hall of Fame. Other profiles will follow in future issues.

Minnesota owes much of its aviation heritage to an elite group of pioneers who put aviation on the front page, some even before Charles Lindbergh, and others after his historic flight. Clarence Hinck was one of those pioneers who just had the entrepreneurial spirit and the gregarious nature that could make almost anything happen.

Hinck was a Minnesotan, born in Litchfield in 1889. He trained as a barber in North Dakota, ran a tavern/pool hall near Devil's Lake, then moved to Minneapolis, buying a flea-bag hotel on Washington Avenue. Profits were slim, so he delivered dry goods for the Daytons Department Store.

Earliest record of Hinck's aviation life began in 1917 when he enlisted in the Navy and became a student at Dunwoody Institute Naval Training School, one of 700 cadets learning the trade of machinist's mate. Hinck was outgoing and he was always looking for a way to get ahead and make a few bucks. He befriended the school's commandant, Lt. Commander Colby Dodge and soon worked his way to becoming the commandant's personal driver. In this role, he could afford to live in the Minneapolis Radisson Hotel, where the accommodations were anything but flea bag! It was always party time. By the time Hinck was graduated, the Great War was almost over and Hinck did not see active duty.

With the war over, Dodge and Hinck joined other men in organizing the Minneapolis Aero Club. He also formed a thrill show association with Dodge and Dick Grace, a former military pilot. The troupe was called Federated Fliers, Inc.

Their goal was to use autos and airplanes to stage thrill show events around the region. Seeking a base of operations, they chose a spot of land in what is now Fridley, creating one of the first airfields in the state. Only two others existed at that time, one used by Walter Bullock on the Earle Brown Farm, and the other by William Kidder in St. Paul.

The Federated Fliers acquired 18 crated surplus JN-4 Jenny aircraft, left over from the Aero Mechanics School in St. Paul which had closed as the war wound down. In 1919, a hangar was built on the Fridley field as a base of operations. Hinck, taking the role of manager of operations, made his first proposal for a thrill show to the Minnesota State Fair – and was turned down. The Fair had already hired a feature performer, Ormer Locklear. Still Hinck found numerous other ways to use the Jennys to make money besides selling them; carrying news photographers over the city, carrying mail packets between cities, and circulating his flyers and business cards everywhere.

The thrill shows typically began with either a series of Whippet (dog) races or motorcycle races between his own employees, often including the pilots. Occasionally, his men would challenge locals in the motorcycle events, and quite often took the prize money themselves.

The same crew did auto push-ball events in front of the grandstand, or auto polo events with stripped down model T chassis and a very large ball inflated with helium. The grandstand events preceded aerial stunt flying. Hinck convinced the State Fair board to hire his Federated Fliers for the fairs of the later 1920s and 1930s. This was in addition to taking the group around the Northwest to put on the same shows at other fairs and gatherings. In 1925, Hinck renamed the group Hinck's Motor Derby.

Speed Holman was Hinck's featured performer in the air, but the events included parachute jumps, balloon ascensions, daredevil auto events and even a pair of head-on locomotive collisions in the middle of the fairgrounds racetrack.

In 1936 and 1937, the grandstand events included a house crash with pilots purposely flying their planes through makeshift buildings erected in the infield with telephone poles inside to tear off the planes' wings. The CAA tried to prevent house crashing because it was too dangerous, but surprisingly, none of the house crash pilots were injured.

In 1939, Hinck acquired a CPT contract from the federal government to train student pilots. For this, he began operating at Wold-Chamberlain Field (now MSP). In 1941, Hinck became the President of the Minneapolis Chapter of the NAA (National Aeronautics Association). He spoke about the need for strong military aviation and about air commerce to groups around the state and went on record backing the creation of an Aeronautical Engineering Department at the University of Minnesota. Following December 7, 1941, he traveled to Washington to seek training contracts for military flyers. He successfully acquired a glider pilot training contract and leased land in Monticello where he built a large facility for the training. 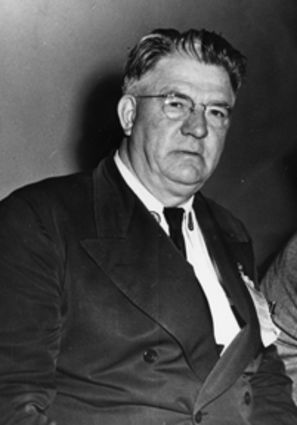 Portrait of Clarence Hinck, circa 1950s.

He also leased three other practice fields for the program. When the Navy took over Wold-Chamberlain in 1942, Hinck was forced to move his program from there and leased what is now the Stanton Airport to finish his contract. After the war, Hinck returned to Wold-Chamberlain to operate as an FBO, while his head mechanic, Nick Flynn ran an FBO at Monticello. Hinck moved his assets to Crystal Airport, continuing to sell Seabee aircraft and offer flight training. By 1966, when he died, Clarence Hinck had been a member of dozens of clubs, boards, and legion posts, and had been the founder and first President of the Minnesota Chapter of the OX-5 Aviation Pioneers.

Minnesota benefited from Clarence Hinck's efforts and promotional activities to get a solid feel for aviation in those earliest days and later to take pride in what Hinck did for military aviation training.