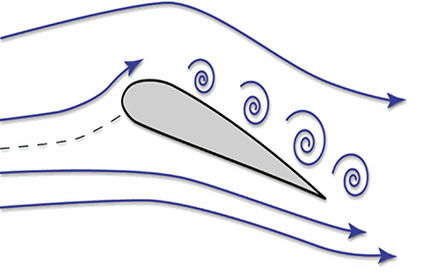 For those that fly, the beauty and pleasure that can be found in flying is often so great that it is easy to overlook or even forget the basics. But every good pilot knows it is very important to remember and review the basics regularly. Too often in accident and incident investigations, it is found that the error made by the pilot was a very basic one.

Dynamic stall is a phenomenon that occurs when excessively steep banks are entered. It can also occur when very rapid maneuvers or sudden gusts of wind cause a wing to exceed the critical angle of attack (AOA). The difference between dynamic stall and other stalls is that dynamic stall can occur at any airspeed and at any attitude.

When the wing is in level flight, the airflow is attached and smooth. As the air particles pass over and under the wing they spin as a direct result of viscosity (resistance to flow). The particles above the wing spin clockwise. Those below spin counter clockwise. As the AOA increases, the trailing edge airflow actually begins to separate from the wing. As it does this and the AOA continues to increase, the counter clockwise spinning air begins to creep up from the trailing edge of the airfoil. At this point lift has been increased tremendously.

As the AOA increases further, the air particles that are spinning clockwise begin to interact with those particles coming over the trailing edge which are spinning counter clockwise. At this point, air flowing over the upper surface of the wing begins to be disturbed. The disturbance (burble) in the airflow results in air flow separation, loss of lift, turbulence and an increase in drag.

The counter‑spinning streams of air form a vortex that continues to quickly intensify. As the pitch‑up angle (AOA) of the wing continues to increase, the burble and vortex expand. This forces the smooth airflow up and away from the airfoil (air flow separation). The separation point then moves toward the leading edge until the wing reaches the critical AOA. At the same time, drag increases; the vortex grows, and dynamic stall occurs.

Most aircraft in flight would experience buffeting before the stall. The danger of dynamic stall is that it can occur with little or no warning and without enough altitude for a safe recovery. Once dynamic stall occurs, the reduced lift could cause the aircraft to roll, pitch down, or both. If both wings stall, the nose will pitch down. If one wing stalls, as in a steep turn, a roll can occur placing the aircraft in a nose low, inverted, or spin condition.

One can avoid getting caught in a dynamic stall through continuing education, constant awareness, and frequent practice of the basics of flight.