Where coffee's always on, service is topnotch and the price of fuel is worth the trip 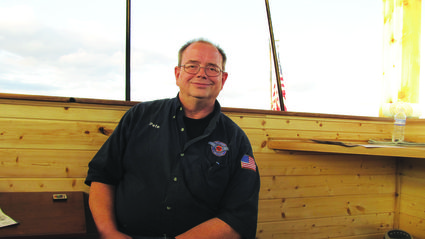 "Honestly, it's kind of surreal," said Dunn. "I'm not kidding. The last few years have been kind of interesting."

"Interesting" is the very least that could be said about the chain of events that brought a team of like-minded men together to form six aircraft related businesses in Aitkin, Minnesota. The businesses now offer (or will soon offer) a full range of services.

The businesses and their services are:

• Aitkin Aviation: an FBO with a north-south tar runway and an east-west grass runway, hangars, a pilot's lounge and small store of pilot supplies and the lowest fuel prices in the entire region; maintenance on the field seven days a week; aircraft painting and interiors; a campground complete with fire rings and shower facilities and two courtesy cars;

• Aviation Education Reaching Others: a non-profit organization providing opportunities to qualified individuals seeking an education in preparation for a career in aviation; two project planes including a 1940 Piper Cub (under restoration) and a 1940 Waco (under restoration).

While each individually owned business has a number of men of vision involved, they all have one man in common, their leader, Adam Forsberg.

Forsberg is the kind of guy who sets the bar high, beginning with his own standards. His life experience includes work in his father's steel fabrication business, serving 11 years in the United States Marine Corps, owning his own construction business, and being employed as a superintendent and building project manager in Hawaii.

He and Adele, his wife, are parents to Justin, an A&P Mechanic and Shea, currently serving in the U.S. Air Force.

It was in Hawaii that Forsberg began taking lessons, flying in Class Bravo Airspace to obtain his pilot's license in 2008. He also received his CFI rating with Pat Magie as his instructor in his Beaver on Floats.

When the employment opportunity in Hawaii came to an abrupt halt as a result of the Recession, Forsberg returned to Minnesota to continue in the field of construction.

Due to a shared interest in aviation, Forsberg and Dunn were also in the process of writing a business plan to restore old airplanes. Their first project was a 1979 Grumman Tiger.

In time, the effects of the Recession continued to spread across the nation until work in construction totally dried up. When Forsberg experienced his third layoff in just over three years, he'd finally had enough.

Similarly, Dunn was also going through a dramatic change in his warehouse management position. The company for which he worked was bought out, resulting in a shutdown of his 30-year career.

The two men decided to go in a completely different direction. The defining moment came in a discussion around a campfire at a surprise party Forsberg's wife arranged foration for our entire lives," said Forsberg. "That night we sat around the campfire and said, this is what we're going to do."

Dunn decided to go to school to become a certified Airframe and Power Plant Mechanic. It was at this very time that Justin, Forsberg's son, reached the very same decision for himself. The two became roommates.

"We were roomies," said Dunn, "which was probably more fun for me than for him because he had a great uncle living with him the whole time."

Everyone continued to move toward the goal. Forsberg obtained his Commercial Pilot status. In the spring of 2011 a hangar at Breezy Point in the Brainerd Lakes Area was purchased and Aero Minnesota began to grow. In addition, the company bought a Seaplane and a Bonanza.

Through a mutual acquaintance, Forsberg took aviation aficionado Dan Dolliff flying. A subsequent friendship was built. As the stars began to align, Aitkin Aviation became available on the market. Dolliff became a business partner, Aitkin Aviation was purchased and Aero Minnesota and Aitkin Aviation were born.

"Dan has made a huge impact on the business," said Forsberg. "So there was the third part of the equation. That was the fall of 2010. So there we were, the three of us going full bore."

Enter Ron Sieling, A&P Mechanic. Sieling had been splitting his work between several companies when the full time opportunity came up with Aero Minnesota and Aitkin Aviation. It was at Friday night fish fry that the idea was discussed.

"I asked Ron, if you could do anything in the world, what would it be?" said Forsberg. "He told me he would really like to restore old airplanes. I said, oh really?"

The deal was sealed. Aero Minnesota/Aitkin Aviation added an engine rebuilding shop to its services of aircraft restoration and paint.

"So now we've got one of the best A&P Mechanics in the state," said Forsberg, "and one of the nicest guys you could ever meet. He's the best mechanic around. I mean, everybody knows him."

To top it all off, Aitkin Aviation even has a campground complete with fire rings, shower facilities and courtesy cars. Feasibly, if someone wanted to go from zero to get-my-pilot's-license, it could be done in two months while living on site.

While Forsberg understands that financial planning plays a part in obtaining a pilot's license, he offers a word of well-seasoned advice.

"I'd always been told that it was too expensive," said Forsberg, "that it was unattainable because of its cost. Then I realized that wasn't necessarily the case. It's no more expensive than any other thing you want to do."

To prove the point, business partner Dan Dolliff approached Forsberg with the idea of forming a non-profit organization that offers scholarships to qualified individuals seeking an education in preparation for a career in aviation. In keeping with the phenomenal growth of the business, the idea was no sooner said than done. The first scholarship has already been awarded.

"We formed the non-profit to help close the gap between the Haves and the Have-Nots," said Forsberg.

The construction worker turned pilot understands how both sides of the fence feel. He also knows exactly what it takes to rise to meet the challenges in life.

"Both Pete and I are really fortunate to be here right now," said Forsberg. "We've definitely fit into the Have-Not category. But you know, there is something about working 16 hours a day, seven days a week for the last four years that caused us to get to this point."

Forsberg is quick to speak of his gratitude, for the combined efforts of all those involved in building the businesses, and for the support of all involved.

"The Aitkin Airport Commission has been wonderfully supportive," said Forsberg. "All the people at the field have been completely supportive. Our families have stood behind us. My wife still loves me even though she hasn't seen me until I crawl into bed at night."

With his experience in construction allowing him to do hands on work at the airport, the gathering of men of action to continue to grow the business, and all eyes on the goal, Aero Minnesota and its affiliated businesses have made a high impact on the community of Aitkin and the surrounding region.

"To put it simply," said Dunn, "we're here to take care of our clients."

The invitation is open to contact Aero Minnesota to fill any of your aviation needs.

As Forsberg is fond of saying, "The proof is in the doing."