Airport of the Month: Tower 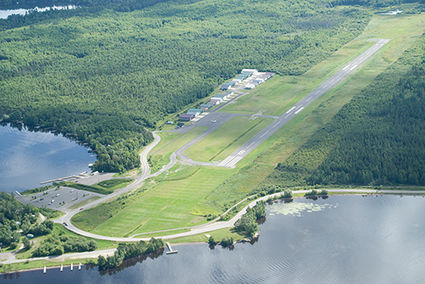 Tower is one cool place. The city is located near the east end of Lake Vermilion, arguably the most scenic lake in Minnesota. The fishing is great and there's plenty of room for boating. With good reason Tower advertises itself as "Your Gateway to Beautiful Lake Vermillion". The City has a harbor and marina, as well as a boat launch next to the city-owned campground at "Hoodoo" point. Tower is cool in every sense of the word. It's the coldest place in the United States that's not in Alaska. The record low temperature for the "lower 48" was recorded at Tower in 1996, minus 60 degrees.

Right next to the boat launch and camp ground is the Tower Seaplane Base. It has plenty of dock space, tie-downs, and the only self service fuel at a Minnesota sea plane base. For land planes the Tower Municipal Airport is just across the road. That makes Tower the perfect place to convert from floats to wheels and back again. The Airport also has self-service fuel, a rustic log arrival/departure building and there's a courtesy car to get you where you want to go.

Ojibwa were the first inhabitants of the area and called the lake "Onamuni", meaning "Sunset Glow". French traders translated that into Vermilion, or red coloring. Permanent European settlers first came to Tower looking for gold. The local geology is similar to gold producing formations in other parts of the Country. A few mines were started, but there was no gold.

The miners found plenty of iron ore, however. In 1882 the Tower–Soudan mine opened and for 80 years it was the mainstay of the local economy. The mine is 2341 feet deep (that's 1000 feet below sea level) and is now an underground State Park. If you're not prone to claustrophobia you can tour the mine, which also houses a physics laboratory operated by the University of Minnesota.

Aviation first came to Tower after World War II. The Burgess family owned the local automobile dealership and the Burgess boys joined up to fight the Axis. Lin Burgess was a B-24 pilot with the 8th Air Force. He flew 23 combat missions, survived one bail out and the low level supply drop missions during the Rhine Crossing. Lin got three of his brothers (also veterans; infantry, paratrooper and navy airplane mechanic) interested in flying. A younger brother who was an Air Force mechanic joined later. A sort of grass runway existed just north of Tower, and in 1950s it was widened and lengthened to support the flying business.

A seaplane base was established and soon Tower was a hub for fly-in fishing adventures, floats in the summer and skis in the winter. Increasing flight restrictions on the northern Minnesota wilderness areas ended the fly –in adventures, so the brothers went back to selling cars. Aviation stayed in Tower though. By the 1990s the runway was paved and lighted, and in 2007 the seaplane base was reconfigured with more pavement and new docks. The 3400-foot long runway was resurfaced in 2012 and GPS instrument approaches were established to both ends.

The Ojibwa or Chippewa still live on Onamuni and now operate the Fortune Bay Resort, eight miles from the airport. There's golf, boating, a casino, great accommodations and excellent dining. The resort folks will pick you up at the airport and take you back after you're done having fun. Tower has one of those neat old downtown areas with several good restaurants and shops. The train depot now houses the Tower-Soudan Historical Society and features a steam locomotive once operated by the Duluth-Mesabi and Iron Range (DM&IR) Railroad. There are plenty of trails for biking, hiking, skiing and snowmobiles.

There's a lot to do in Tower, even when it's cold. You can get there by car, but Tower is a long drive from any place. The best way to visit is to fly, and you can come on floats, wheels or skis.