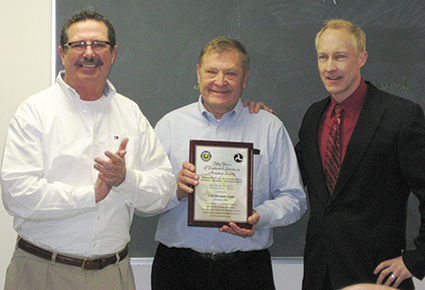 A friend to the Minnesota aviation community and FAA Designated Pilot Examiner, Carl H. Lipke, has recently decided to retire from conducting pilot certifications after 21 years of faithful service to the Federal Aviation Administration and to pilot applicants throughout this region. Carl's dedication to local flight schools and FBOs will be missed as he worked hard to be available when his services were needed. I had the pleasure of having lunch with Carl last week. It was obviously a painstaking decision for him to retire his designation. "I just love to fly ... just love it!" he spoke as we dined.

Carl certainly had a reputation too! He was strict and was "by-the-book" when giving practical tests. He was known for his long oral examinations (did you bring your lunch?) and thorough flight tests. If you passed with Carl, you knew your stuff! "I just never wanted to read about any of my applicants in the paper," he exclaimed. "I told my applicants that too – especially if I had to issue them a notice of disapproval," he said as his eyes squinted.

Carl has been active in Minnesota aviation for many years, as this coming November marks 60 years of accident-free flying! He got his start in aviation in Faribault, Minn. – receiving his first lesson from Lawrence Merrill on October 22, 1953 in a Taylorcraft BC12-D. (On a side-note, I happened to look up the registration for this "T-crate" and it's up in Milaca!) Carl soloed that following February and got his private pilot certificate on September 4, 1955. Today, Carl holds all his ratings, ASEL, AMEL and ASES, at the Airline Transport Pilot certificate level – not common to most aviators.

Teaching is Carl's passion! He taught school over 40 years as a music teacher for the North Saint Paul High School. Carl also worked in the University of Minnesota flight department at the Anoka County airport and at Wings, Inc. out of the Saint Paul Downtown Airport. He was also the staff pilot for the Mount Olivet Lutheran Church, flying pastoral staff throughout Minnesota with several trips to Mt. Olivet's summer camp near Tofte, Minnesota. 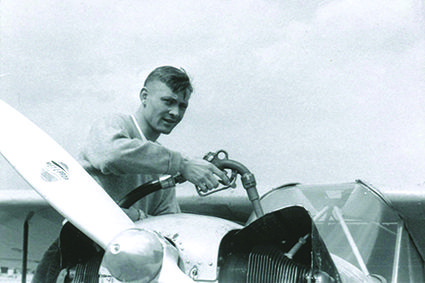 Carl gassing up a Piper Cub sometime around 1957.

Carl was bestowed with the prestigious Wright Brothers Master Pilot Award on February 1, 2010. The FAA recognizes pilots with this award who have demonstrated professionalism, skill and aviation expertise by maintaining safe operations for 50 or more years. I remember that night very well! A group of us surprised Carl at his church where he was rehearsing with his choir and we presented him with his award. He was quite surprised and certainly honored to receive such a great award in the presence of his wife and many long-time friends.

So what is in store for Carl now? He will continue flying along with his many other hobbies: directing multiple choirs throughout the Twin Cities, fishing, hunting, spending time at his lake home and certainly, being with his wife and family. Carl Lipke ... we salute you and thank you for your many years of dedication and service to the FAA, your applicants, students and to aviators throughout Minnesota and beyond!