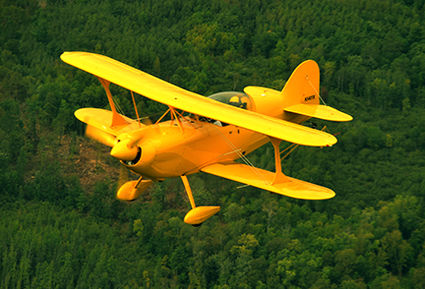 Tom Kerns with P-Rex at full snort ... and surprisingly right-side-up.

This year's outstanding group of 25 airplanes from all over the Twin Cities descended like a small air force upon the ramp of Modern Avionics and Inflight Pilot Training on Saturday, September 14th.

The flight marked a decade of the best attended fly-out event in Minnesota which has only gotten better with age. The Flying Cloud Air Tour started in 2004 with one thing in mind; fun. We look for great places within a short flight of the Minneapolis area to fly into and enjoy the company. It's a perfect opportunity to get to know other pilots and see new places that our typical flying routine doesn't quite touch.

The week leading up to the Air Tour is always exciting as folks scramble to finalize their plans to join us and the weather app on my phone gets checked at least nine times a day. We had a tentative final group of 31 planes this year, but the day before being an ominous Friday the 13th, we lost six overnight before our departure. 'Not feeling well', 'dead battery', 'forgot I had a wedding to attend' (probably his own), and 'no oil pressure on start up' were among the lineup's casualties. Mechanical hardship aside, it was our third largest group in 10 years.

By 8 a.m. we had everyone parked in their positions and began the pilot safety briefing in the hangar that Inflight graciously set up for us. As the size and experience of our group has grown and evolved, so have our planning and pre flight routine. The presentation is an open forum that runs around 45 minutes and establishes the rules for the day while calling on the experience and thoughts of each pilot flying with us. We covered everything from weather to air-to-air photo operations, and by the end every pilot was ready to hit the throttle. James Bungert of South Saint Paul led the way this year in his classy fast-back 172 with his son and daughter as navigators.

The weather was great; mostly sunny skies with a 10 knot breeze out of the south and temps in the low 70s. Just enough crosswind on landing to keep the bragging down, and enough of a tailwind to make even a Piper feel fast, compared to a Cessna anyway.

I left my Cessna in the hangar this year and flew a friend's Bonanza ... slow pokes. Weather is always the concern and we have conservative minimums as this whole thing is supposed to be fun. There is always a backup date scheduled one week later, but a few of the last 10 years were washouts on both Saturdays.

The speed demon of the group, Rob and Shar Hardcopf in their V-Tail Bonanza, was on final approach to our first stop, East Gull Lake, MN (9Y2), at the tail end of a short 40 minute flight. By contrast, Pete Gabrail was setting the scenic pace in his semi-stealth Ercoupe at a leisurely 1 hour 10 minutes. After our first 10 airplanes had landed, the pattern was starting to get ugly. The combination of 15 airplanes left to land, a few other locals flying in, and all of the normal other-airport chatter on a Saturday morning CTAF made for a busy frequency. But, as our veteran Air Tourers will confirm, we make it work every year. Ben Thoringer and Dan Trout of Madden's on Gull Lake rolled out the red carpet to welcome us with a wonderful venue for our driving range contest.

If you're ever near central Minnesota, this is a great place to stop in, play the range or a full round and catch a ride to one of their great restaurants.

This year's golf contest was the main attraction, almost every one of the 60 attendees fired off their 6 shots after some warm up swings. James Hennen from Club Cherokee at Crystal took home the trophy for the longest drive with a straight shot well over 300 yards. Brad Johnson of Cloud 7 at Flying Cloud won the best wedge prize with a horribly duffed attempt at a drive that dribbled right up next to the flag at 90 yards. And Mike Swanson, a local airline CRJ First Officer, handily secured the bragging rights to the worst shot. After a PGA level wind up and crushing follow through, Mike had trouble finding just how far his epic shot had traveled. With all of the pain we've each experienced while teeing off in front of onlookers, Mike soon saw that he wouldn't need to tee up another ball for his second attempt. He blamed his lackluster golfing on the flight up and it may have been a legitimate gripe considering he rode shotgun with Tom Kerns in the monster aerobatic machine he built and calls Pterodactyl Rex, one of the highest performance two-seat biplanes on the planet.

After tearing up the driving range (literally) we were off to Longville, MN (KXVG) for lunch. As if the prospect of a crosswind landing in front of 50 pilots isn't intimidating enough, Steve Shallbetter and his group of local pilots had set up a spot landing contest for us on runway 13 at Longville. The idea is to [safely] land as close to a point on the runway as possible without landing before it.

I'm probably not alone when I admit to leaving a couple of tire shaped dents in the asphalt in a feeble attempt to win. But try as I may, I didn't even get close. Bob Pittelkow, a seasoned AARP member, spanked all of us on the tour by landing his RV-7A an incredible 13 feet from the line ... who needs to hit the long ball when you can fly like that?!

The folks at Longville were the perfect GA stewards parking all of our planes and giving us rides into town. Patrick's Fine Dining on Girl Lake hosted our lunch and suffered all of the awful pilot jokes as a result. They're just a quick 10 minute walk from the airport if the courtesy car is out, even quicker if you park your seaplane right at their dock, and have excellent food with a view. The final leg home took us just ahead of some rain showers and made us feel like real 'working' pilots. I think I even heard the words 'deviating left of course' over the radio at some point. Another terrific year behind us and we're already planning for the next one, thanks everyone for the great time.

If you want more information on the Air Tour or would like to join us next fall you can check out the Air Tour page at http://www.inflightpilottraining.com or email me at benmcq@msn.com. There's no cost to join and any plane can join, we regularly have everything from Taylorcrafts to T-34s. Pictures for the last few years' flights can be found at http://www.greatbamboohouse.com. 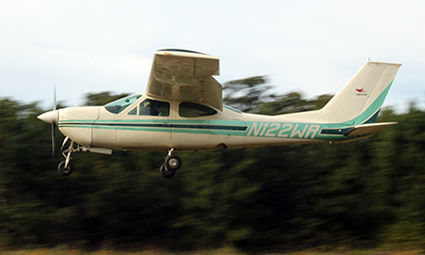 Jon Aiton of the Rangers Flying Club in their Cardinal RG.