Airport of the Month: Cambridge 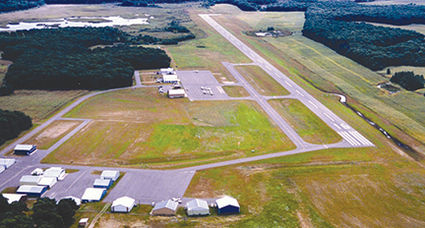 How places get named can be interesting. Cambridge, Minnesota boasts a higher percentage of Swedish Americans in its population than any city in the U.S. Yet it was named for the Cambridge in Massachusetts which in turn was named for the university town in England. That's because before the Swedes arrived, fur traders from New England settled in the area.

They got to Cambridge by way of the river which connects Mille Lacs to the Mississippi. The Dakota name is "Spirit" or "Mystic" River. The traders had a different kind of spirit in mind and called it the Rum River. Cambridge has for many years billed itself as the "City on the Rum River."

In recent years they've added the slogan "Minnesota's Opportunity Community." That's a well founded claim. Since 1970 the population has virtually tripled, from about 2,700 to over 8,000. It takes a lot of opportunity to attract that kind of growth. Proving the value of access to aviation, the Cambridge Municipal Airport has played a major role in attracting people and businesses to the area.

Originally the airport was small affair on the other side of town. One of the local pilots was also the Isanti County Sheriff. Lorne Erickson flew a 65 HP Champ for fun, but he understood what General Aviation could do for a community. He was instrumental in helping the city build a new municipal airport and even donated some property to get things started. The Sheriff worked hard to make the airport a reality. To honor his contribution, a city park right next to the airport is named for him. It's a great place for a fly-in picnic.

It's no coincidence that development of the airport paralleled the City's growth spurt. Until 1970 it was a grass landing strip. In 1971 the City opened a paved and lighted Runway (16/34). A new hangar/aircraft parking area constructed at the same time.

Air traffic increased enough that by 1984 a parallel taxiway was added, the hangar area expanded, and a new apron constructed. By the 1990's Cambridge was seeing more high performance aircraft and instrument operations. In 2001 the runway was extended to its current length of 4000 feet. At the same time Runway End Identifier Lights (REILS) and Precision Approach Path Indicators (PAPIs) were installed to supplement the new RNAV/GPS approaches including LPV for Runway 16. An automated weather system (AWOS) was also commissioned. The hangar area again expanded. Cambridge is now home to 50 aircraft and supports over 16,000 annual operations.

With the new facilities it's an all weather airport, so getting there is no problem. There's an Arrival/Departure Building with a waiting area and flight planning room. Taxicabs are available to get you to town and there's self service fuel.

Opportunity in Cambridge is not limited to just jobs or business. There's plenty of fun to be had. The Rum River meanders through town just east of the airport. Canoes and kayaks ply the river, which also has some great fishing spots. Cambridge and Isanti County have an excellent system of parks. They also have some good snowmobile, hiking and biking trails, one of which runs adjacent to the airport property. The city hosts a couple big events. Naturally one is the "Swedish Festival" sponsored by the Lutheran Church.

If you're looking for an opportunity to work or play, Cambridge is the place to be and the way to get there is to fly to the Cambridge Municipal Airport. While you're there stop at the Lorne Erickson Memorial Park and remember the flying sheriff and what he accomplished for aviation in Cambridge.