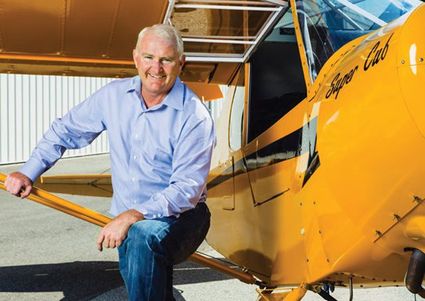 "Throughout the past several months, the board searched for a pilot with true passion for general aviation and depth of involvement in the community. We were also looking for an experienced and seasoned business leader. Not only does Mark bring 35 years of involvement in the GA community as a pilot, he also has decades of experience in leadership positions in the home improvement industry, a business focused on the kind of service that has always been a hallmark of AOPA," Trimble said.

A native Minnesotan, Mark became a pilot in his twenties. The pilot community and his close flying friends are the reason you can find him at an airport or a seaplane base nearly every weekend. Over the years, as Mark continuously added new ratings, he would fly his wife, Vickie, and four children (plus a cat and a dog) in a Bonanza on the weekends, enjoyed hangar flying with buddies in Minnesota and found some of his greatest enjoyment in encouraging his relatives and friends to also learn to fly.

An aircraft owner and an AOPA member since 1987, Mark has logged more than 7,500 hours of flight time. He enjoys flying everything from light seaplanes to turbines to helicopters, but his favorite airplane continues to be his Piper Super Cub. His love of flying is infectious: Not only did Mark encourage his father to learn to fly, but two of his sons-in-law have earned their pilot’s certificates and his own son will become a pilot soon as well. He has also enjoyed flying Young Eagles and donating time and resources to the Experimental Aircraft Association.

In his professional life, Mark worked his way up through the home improvement business and acquired a sharp focus on customer service that will translate well to a membership association. Most recently, he served as CEO of Orchard Supply Hardware Stores Corporation, a leading retailer of home improvement and garden products. Mark also served in senior executive roles at Scotts Miracle-Gro Company, Gander Mountain Company, The Home Depot and other companies in the industry.

Mark’s retail experience is an important asset. He looks forward to gathering feedback from members and then focusing resources on the areas that most benefit GA pilots and increase the value of membership. Mark also believes this approach can be useful in increasing participation by AOPA’s members in the association and driving GA flight activity. His experience in reaching customers will give new energy to AOPA’s goal of expanding the pilot population and encouraging activity and involvement by today’s pilots.

Just wanted to say congrats to Mark. So happy a Minnesotan will be leading AOPA. And great website Minnesota Flyer! Thanks! Your magazine is always the best. Now, you have a great website. I will tell everyone I know!