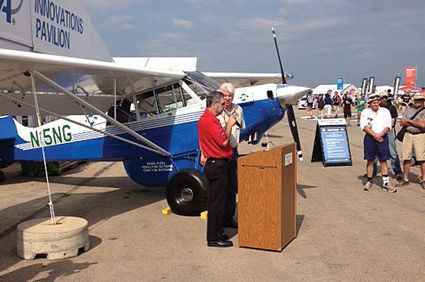 Outside the Innovation Pavilion, Minnesota's own Greg Herrick, President of the Aviation Foundation of America, and Stu Horn, President of Aviat Aircraft show off the technology demonstator for a Compressed Natural Gas (CNG) powered aircraft in a joint announcement.

Outside the Innovation Pavilion, Minnesota's own Greg Herrick, President of the Aviation Foundation of America, and Stu Horn, President of Aviat Aircraft show off the technology demonstator for a Compressed Natural Gas (CNG) powered aircraft in a joint announcement.

"I was looking at CNG for my cars and trucks," said Herrick, "and I wondered why nobody was doing it for aircraft. The cost of the fuel 80 percent cheaper than the equivalent gallon of avgas--the stuff is so cheap that they flare it off at the oil fields because they have no way to transport it. If you have a gas water heater, you have the equivalent of a 100-octane pipeline right into your house, shop, or hangar."

Herrick went on to list the other benefits of operating on CNG: "This isn't magic--the technology has been around for a long time. With no lead or combustion by-products, your plugs and oil stay clean--conceivably, you could be using an artificial lubricant, and make only one oil change on the way to TBO. There's no problem with hot starting as there is on a fuel-injected engine. The octane rating is 138. There's no issue with running lean of peak--you just start it and operate it just like a car."

Horn explained the technology. "We have a 9-gallon tank on this aircraft--enough for about 1:15 of flight. Since CNG filling stations are relatively rare, we kept the normal long-range tanks in the airplane. The switchover is accomplished with the flick of a switch. The tank is mounted in a belly cargo pod -- in an airplane built for CNG, tanks could be located in the wing and fuselage. The tanks are crash-proof -- they have to pass crash and fire tests -- and even being fired at with bullets!" Horn emphasized that "this is not Propane--Propane is a low-octane fuel." Horn estimated that a CNG dual-fuel Husky would be priced at approximately $12-15,000 more than a conventional aircraft--a figure that would quickly be made up in fuel savings. "CNG is less than a buck for an equivalent gallon" Herrick explained. "I see this as particularly beneficial to flight schools--where the average flight is only about an hour long." Herrick pointed out an important side benefit. "Fully half of the pollution from 100 octane fuel is from evaporation during fueling operations. CNG eliminates that issue."

I asked about the cost of the fueling stations. They explained that a home refueling station that takes CNG off a municipal pipeline source would cost about $500-$1500, and would take about three hours to fill a 20 gallon tank. A commercial filling port would cost about $15,000 -- but would refill the aircraft in only about 90 seconds -- faster than filling with avgas. Both men stressed that this was only a technology demonstrator -- "the weight and cost of the bottles has been coming down every year. We wanted a specially-configured tank, but the manufacturer has been so busy manufacturing them for drones that they haven't gotten to us yet."

Is this the "fuel of the future"--utilizing a product that is normally thrown away? Will you be "Cooking FLYING with gas"? We will see next year, in Oshkosh!