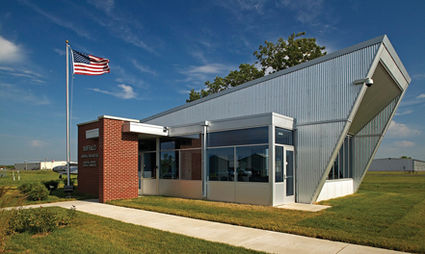 Local sports teams are known as the “Bison,” but to be technically correct they should be called the “Ictiobus.” That’s because Buffalo was named after the fish species prevalent in the local lakes, not the shaggy animal that once dominated the Great Plains. A rough fish for a mascot probably wouldn’t be a great imagine maker and in Buffalo, they know how to make a good impression.

Downtown is pristine, the lakes are wonderful, the city has a great system of parks, and the new arrival/departure building at the airport is just the thing you want to see when you climb out of your airplane after a long trip. Not only does Buffalo have a great image, they also know how to get it done. Bison it is!

Buffalo Municipal Airport is a busy place. FAA statistics show about 22,500 annual operations. Fifty four aircraft call Buffalo “home base.” Two unique and thriving aviation businesses are located there. Part of the secret to success might be airport manager Chris Fredrick. Chris is a marketing guy, not the aviation or public works type more commonly found managing smaller airports. When he’s not taking care of the airport, he’s coordinating marketing for the entire city.

D’Shannon Aviation is one of the airport’s businesses. They’re new to Buffalo, but are one of the best known producers of modifications for Beech Bonanzas. D’Shannon is the world’s largest holder of FAA supplemental type certificates or STCs. Besides the Buffalo facility, they have an operation in Mooresville, NC that specializes in aircraft engine rebuilding and upgrading. D’Shannon is so good at what they do, that the Aircraft Owner’s and Pilot’s Association (AOPA) picked them to help with this year’s sweepstakes Beech Debonair.

West Metro Aviation “where the coffee’s always on and kids are welcome” is the airport’s other business. Owned by air show pilot Mike Wiskus, West Metro is a full service FBO. They offer flight training, pilot services, and provide aircraft management for businesses and individuals. When he’s not flying them, Mike and his staff use their talents to building and maintain show airplanes. Their other specialty is refurbishing vintage aircraft, but they also do the more routine kind of maintenance on all types of aircraft.

Like a lot General Aviation airports, Buffalo started out as a grass landing strip. First opened in 1966, the 2600 runway was paved and lighted in 1986. Increased traffic and the need to handle higher performance aircraft led to the runway being widened and extended to its current 3200 feet in 2010. A full parallel taxiway was added at the same time. The airport now has an automated weather station (AWOS). Runway end identifiers (REIL) and approach path indicator (PAPI) lights were also installed as part of the 2010 project, and there are instrument approaches available when the weather is less than ideal.

Once on the ground, rental cars are available as is self service fuel. The arrival/departure building was built in 2007 and is gorgeous. Besides looking nice the A/D building has lots of meeting space, a pilot’s lounge, a kitchen, vending and flight planning areas.

The Minnesota Council of Airports (MCOA) thought it was a great building and presented the City with an “Award of Excellence” at the 2007 Aviation Symposium. Chris Fredrick has his office there too. Stop in and he’ll tell you all about opportunities in Buffalo, aviation and otherwise.