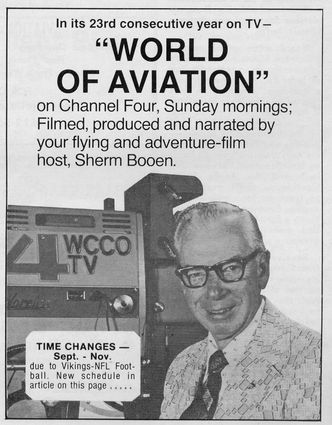 The first issue of the Minnesota Flyer was published January 1, 1960. It had four pages, was hand addressed, 500 copies and 5 cent postage stamp.

No commercials, just a note - please call for comments, and a telephone number.

The same was true for the February and March issues. Positive comments! In June, the issue printed 1,000 copies and an addressed envelope was attached. The result was more than expected -- the mail box was filled with subscriptions and two dollar checks.. That was a start that grew to 5000 subscriptions in 20 years.

The Minnesota Flyer became thee handbook for Minnesota aviation.The pages were filled with advertising pointing the way to airports, airplanes facilities and people. In each issue there were stories and pictures of people and events. It's been that way for 50 years. The Minnesota Flyer was, and is a people magazine.

Memorable events were noted in those 50 years. The Twins Baseball Fly-In attracted thousands of flying baseball fans who flew in, landed at FCM, enjoyed a lunch and bussed to the game and return. The Twins baseball fly-in lasted over 15 years.

Another annual event was the Minnesota Air Tour that continued for several years. The largest was the three-day flight to Canada. Thirty-four airplanes flew entrail via Fergus Falls and Pembina, parked on an unused taxi way, cleared customs, and were bussed to the Winnipeg Hotel for an evening of fun. The return trip was via Baudette and Lake Mille Lacs. Both of these big events were arranged and executed by the Minnesota Flyer.

Breakfast flights were popular then, as they are now. The Minnesota Flyer was the guide then and listed in every issue for 50 years. In 1990 the Flyer was bought and operated by Dick Coffey. In October of 2002, he sold it to Tim Franklin, who owns and edits the magazine today.