Sharing the Love of Flight, One You Tube Video at a Time 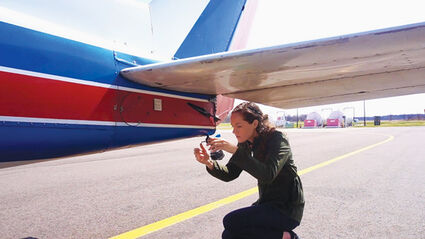 If you asked me to remember my first flight in a small airplane, I'd be dimly able to dredge up some spotty account of a flight with my family in a Cherokee 6 or Bonanza or something similar, piloted by my mother's second cousin. The particulars of the flight wouldn't be anything interesting-just poking some holes in the sky on a sunny day in Cherokee, Iowa and buzzing the family farm in Marcus-and I'll be the first to say my recollection of the details is poor. But I remember the joy of lifting off the ground, of climbing into the sky and then swooping down over the trees and cornfields. I still know that joy of feeling one with the plane-that you're flying with it, not just on it like an airliner. I fell in love with the sky, and I haven't fallen out of love with it since.

One Minnesota pilot has channeled that same love of flying into a creative project meant to convey that feeling to others. Pilot and videographer Ashley Ginther started her own YouTube channel, meandmyflyingmachine, to chronicle her experiences in aviation and capture the romance of flight. She shoots short videos compiled of clips from preflight to shutdown, as well as footage from her flights to different airports around the state and brief glimpses of the adventures to be had and stunning natural beauty of the environment to be experienced at each place.

Every pilot has an aviation origin story, and Ashley's makes her seem predestined to share the love of flight with others because she was struck deeply by it herself. "I never thought about flying until about four years ago," Ashley said as I spoke with her by phone recently. "I was working in construction and living in Kitty Hawk, North Carolina-home of the Wright Brothers' first flight-when I saw an airplane towing a banner advertising air tours for $15." She decided to take the plunge, and found herself in a Piper Cub with an energetic 17-year-old pilot. "I thought the Cub was amazing," she said, and found herself totally hooked from the moment she got in the plane. "The pilot said to me, 'You know, you could do this.' I hadn't really thought about it before that, but that was when I realized that flying was something I really wanted to do."

But while airplanes run on avgas, dreams of flying run on money. Over the next few years, Ashley worked, went to local fly-ins, and spent time at local airports, unable to kick the bug that bit her, but biding her time to save up the funds. Finally she found a local opportunity for training at a more affordable rate, worked as many hours at her job as she could, and raked together the money to finally make a go at flight training. Today she has had her private pilot's license for a year, has added a tailwheel endorsement, and even spent time this past summer getting a taste for aerobatics.

So where did the cinematic videos begin? "I really started the YouTube channel as a result of flying to different airports for passport stamps. I was telling my family about this, and realized that here I am in this world they know nothing about," Ashley explained. "I'm usually a very private person on social media, but I really wanted to get back into videography, so I decided to just give it a shot." And she's having a blast! "It's opened a bunch of doors for me-pilots wanting documentaries of people, flights, memories. Some of them want to exchange footage for flight time, so I've gotten to have a bunch of cool experiences as a result of that. I'm enjoying the process a lot."

The meandmyflyingmachine videos are a combination of preliminary planning and spontaneous inspiration. If she's going to a new airport, Ashley usually does some scouting as to what scenes or subjects she might include in the video, but after that she just starts filming. "Sometimes things just happen, like I was working on the vintage-themed video, and I didn't know ahead of time this sandhill crane migration was happening, but I got footage of that, and that was really neat." Regardless of the location or theme, "it always works out!" Ashley added that at the end of the day, her project is really about having fun and sharing her love of aviation with others. "It always works out!"

Ashley's travels so far have included mainly airports in Minnesota and Wisconsin, her favorites to date being Madeline Island and Sky Harbor. "I love the water and the nature. Camping on Madeline Island was just beautiful-the coyotes howling at night, the deer hopping over the runway, biking down to the shore." In the future she hopes to fly around the greater U.S. and film different places. Ashley said she's thought about starting instrument training this winter, but her real focus for the time being is on filming.

One of the other things she's proud to do with her videos is depict a female pilot. Every video at some point includes footage of Ashley doing preflight checks or pulling an airplane out of a hangar. "I did a kind of formation flight a while ago where we had three airplanes with female pilots up together and it was so empowering to hear three female voices on the radio at the same time." Ashley hopes that her videos might serve to inspire or empower other women to pursue dreams of flying as she did.

To date, Ashley's favorite among her videos is one she did recently in silent-film fashion with a vintage theme. "I really enjoyed editing it and the goofiness of it. I love everything vintage aviation. It felt like I was living my secret dream life!"

With the care and intention she puts into her videos, with stunning shots of Minnesota lakes and Wisconsin forests, shots of takeoff climbs and landing roll-outs, native animals, and our familiar small airports, meandmyflyingmachine helps depict a dream many of us are fortunate to share. With a fresh eye and budding talent, Ashley is helping to share that dream and that love of the sky with others.