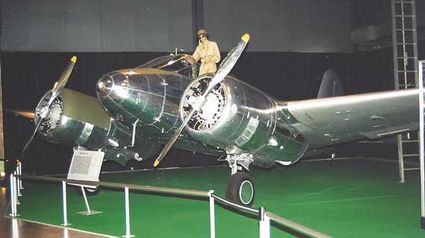 The AT-10, or Model 26, designed by a team led by T. A. Wells, trained over half of the Army's multi-engined pilots. Although Beech built 1771 in Wichita and Globe built 600 in Dallas, it is little known today and almost extinct. It was designed for easy subcontracting to furniture makers with wood. The engine cowlings and cockpit area were the only major metal structural components. Even the fuel tanks were wood, lined with synthetic rubber. In all, 85% of the airframe was sub-contracted. The two seat AT-10, powered by a pair of 295 hp Lycoming R-680 radials, performed well. It had a top speed of 198 mph and a range between 660 and 770 miles. In addition to its excellent performance, it had full dual controls and an autopilot. Beech configured one with the "V" or butterfly tail that later appeared on the classic Bonanza.

At the end of World War II, the War Assets Administration had 1930 Wichitas for sale at an average price of $7500.00. These could be flown under Limited Type Certificate #12 of 14 April 1947. A few were sold to aerial survey companies, tech schools, and individuals. Some were converted to two bed trailer houses.

The aircraft in this photo (AAF 42-35143) is a Globe built AT-10 that was restored for the Air Force Museum. It was rebuilt between 1988 and June 1997, when it was put on display. Another AT-10 is undergoing restoration at AirCorps Aviation in Bemidji.